Earth-27 Wiki
Register
Don't have an account?
Sign In
Advertisement
in: Characters, The Team Members, Titans Alumni,
and 37 more

Wally West was born on January 16, 1994, in Blue Valley, Colorado. Since he first heard reports of a masked vigilante in a cape in Gotham City, Wally has a herophile. In 2001, when Wally visited Central City to attend his aunt’s wedding, Wally prayed for Trickster to crash the wedding so he could have a chance to see the Flash. When the wedding was over and done, without so much as a drunken argument between relatives, Wally was bummed, so his new uncle, Barry Allen, approached Wally to see if he could cheer the kid up. When Wally said he was hoping to see the Flash, Barry let Wally in on a secret, saying that because he was a member of the CCPD, he knew The Flash personally and would arrange for Wally to meet him, the next time he visited.

That next summer, Wally talked his parents into letting him go back to Central City to spend the summer with his Aunt Iris and Uncle Barry. Wally’s first meeting with the Flash was everything he ever wanted and so Uncle Barry would “arrange” other meetings for Wally, in exchange for helping his aunt with the infant twins. Of course, Wally did just that.

When Wally was thirteen, his dad got a job in Keystone City, just a short drive from Central City and the family moved. After that, Wally was over at the Allen household almost daily to mow the lawn, organize the garage, babysit, whatever the Allens needed done so that Barry would arrange another meeting. It was while doing laundry for the Allens that Wally found a note in a pocket of Barry’s that was reminder to a code to a special door of Central City’s STAR Labs. Due to Wally’s obsession with the Flash, he knew that the Flash had been known to use STAR Labs equipment so Wally expected this to be where Barry and The Flash would meet, or possibly be the Flash’s lair.

While both guesses were more or less correct, what Wally wasn’t expecting was to see his uncle dressed in Flash’s costume (sans mask) talking to a team of scientist about whether Flash’s powers were a fluke or could be repeated. When Cisco Ramon mentioned he had set up equipment to test that theory inside the particle accelerator, Wally rushed down the halls of STAR Labs on a collision course with his destiny.[1]

We now know that if Wally was not lucky, he’d be dead. Wally had no way of knowing that his aunt has some weird ability to adapt the DNA of those around her to make them better candidates for developing a speedster meta-gene. Because Wally had been spending so much time in the home of the Allens prior to his incident, he lived.

After winning the genetic lottery, Wally somehow fast-talked (or blackmailed) his uncle Barry into letting him train after school to be Flash’s sidekick. In true Wally fashion, the day that Cisco made his training costume, Wally took it for a literal test run out and about in Central City. By the time The Flash caught up to him, Wally had already caught Weather Witch robbing a bank, saved a depressed teenager from jumping into the Missouri River, and had crashed no less than two news reports to announce that he was Kid Flash, Central City’s newest hero.

Barry decided that Wally needed some full-time discipline training and with Flash being overwhelmed with crimefighting throughout the Midwest due to the JLA being disbanded earlier that year, Barry knew he was not the one to give it to Wally (and let’s face it, Barry’s hardly the best role model for discipline).

Silas Stone had told Harrison Wells that his son Victor was putting a program together in the old Super Friends sanctuary and Harrison recommended that Barry place Wally there. Of course, before Barry could make up an excuse to explain Wally’s absence for the summer, Wally had already told his parents that he was Kid Flash. The Wests must be cool parents because they were thrilled with this news.

So, Wally joined the “Young Justice”, rescued Superboy, fell in love with Miss Martian, bantered with Artemis, collected some souvenirs, fell out of love with Miss Martian, became Billy Batson's bestie, saved the life of Princess Perdita Zytle, and found his own little spitfire—one who won’t let him get away with nothin’. Oh, yeah… and he probably single-handedly kept a number of streetside vendors in Central City in business (he eats like forty meals every day). All in all, Wally made quite a name for himself as Kid Flash, but you can’t be a kid forever…[2] 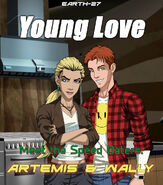 Impulse and The Team