Aristotle "Tot" Rodor was something of a child prodigy, showing a talent for invention from an early age. As a boy, Aristotle was raised mostly by his uncle as his father died in a car crash and his mother came down with a fatal strain of influenza. Tot's uncle was a bound to a wheelchair from the same accident that took the lives of Tot's father and his uncle's wife. Despite his handicap, Uncle Horatio was an active man and did his best to help foster the minds of Tot and his own son, Alvin.

Though he was a natural genius, he was also something of a gadfly who never received his doctorate, having refused to submit inferior work in the pursuit of advanced degrees. Several inventions developed by Tot while he was still in his twenties left him with a regular, if modest, income and got him enough prestige to get a job at Metropolis University teaching a variety of courses in technology, biology, and philosophy. Among Tot's students was a young Charles Zsasz. Zsasz's disruptive behavior, cunning mind, and earnest heart endeared him to Tot right away. Tot took an interest in Zsasz's education. Tot even helped Zsasz get financial aid and grants, and offered the kid a spare room in his home to be certain the kid hit a rough patch in life while doing the right thing.

In 1999, a few years after Zsasz graduated and moved on to become a famed investigative journalist known as Vic Sage, Tot met another student that kindled a love of teaching and so he decided to quit teaching and entered the private sector. Tot ended up in Hub City working for a BioMed research company where he developed a prototype skin graft substitute.

This was fortunate as Tot was able to seek out his old student (and probably the only person in the world Tot trusted) when his two co-inventors turned up dead in mysterious accidents. To allow Vic to investigate, Tot made a mask using the same prosthetic (called Pseudoderm) to cover Vic's famous features. What Vic uncovered in a manner of nights exposed a grand conspiracy that sent ripples nationwide and would forever the two men's destiny, reshaping them into a couple of conspiracy-chasing do-gooders and vigilante heroes.

When Vic suddenly fell ill from lung cancer, Tot followed Vic to his native home of Gotham and helped Vic make his final arrangements and train a successor to the faceless mantle. With Vic's passing, Tot has been hurting. He carries on as a mentor to Renee Montoya , the new Question, but I'm told by those who knew Tot best that he's changed. The old Tot died with Vic.[1] 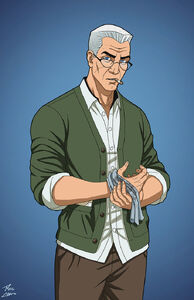 Tot Rodor
Add a photo to this gallery 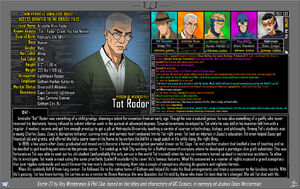 Oracle Files: Aristotle Rodor
Add a photo to this gallery

Retrieved from "https://earth27.fandom.com/wiki/Tot_Rodor?oldid=118531"
Community content is available under CC-BY-SA unless otherwise noted.