Public / No Effort to Conceal Identity

This vanguard determined that Earth was nearly primed for invasion. Moving to the next phase of their plan, they "seeded" the planet with sleeper agents by abducting thirteen women and implanting in them the genetic material of H'San Natall, the most "evolved" form of the Reach's primary species. Most of these women were then subjected to memory reconditioning and returned to Earth. The advance party remained in Earth's orbit, monitoring the development of their sleeper agents and passively broadcasting psychic information to the planet meant to condition the agents for their role in the coming invasion.

Toni Monetti was born. Her parents were happily married and did not suspect anything peculiar with the birth of their daughter. Toni was the pride and joy of her father, who not only raised her blissfully unaware he was not her actual father, but he also spoiled her rotten. As a wealthy Italian-American immigrant and a United States Senator, Anthony could afford to give Toni everything she could ever need or want.

When Toni was thirteen, she began to feel a physical change. She felt ill for several weeks and noticed that her skin was becoming paler day by day. She spent the summer between seventh and eighth grade lounging by her family's pool in a bikini, but didn't tan at all (nor did she burn).

A month before she turned fourteen, just as she started eighth grade, Toni began having strange episodes where she felt as though she leapt out of her own body and spent anywhere from a mere moment to close to an hour as a passenger in the body of someone else. This persisted for a week until this strange hick boy showed up in her bedroom on a weekend her parents were away. Toni was poised to call the police when she felt an overwhelming sense of déjà vu and froze her in place. The boy began to introduce himself when Toni blurted out his name: "Cody Driscoll."

Cody explained to Toni that he had been having similar visions, which had included riding shotgun in Toni's head. Cody said he had also began to develop some incredible physical abilities, giving Toni a demonstration of possessing coordination and strength exceeding a world-class athlete. Cody also placed his hand on a cutting-board in the kitchen and grabbed a stainless steel butcher knife for another demonstration. When Toni realized what he was about to do, she let out a frightened gasp and expelled a silvery blast of psychic energy into Cody, knocking him through the kitchen sink and the wall behind it.

Realizing that they had to get to the bottom of this, Toni let Cody talk her into stealing her dad's $230,000 sports car and driving up to Ivy Town in search of a third kid whose experiences they had been eavesdropping on. Neither one truly grasped the life-changing journey they had begun.[1] 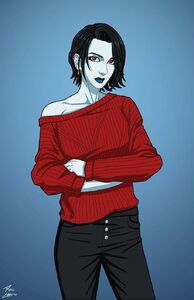 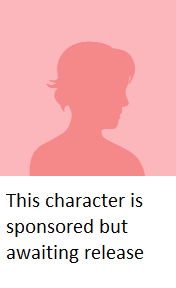 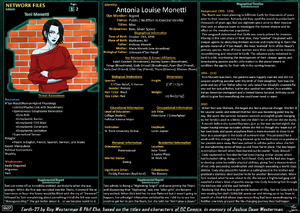