Ak-Var and his wife Tes Del-Nar were appointed to be the administrators of the Kryptonian colony on Kandor after a Calatonian attack decimated the House of Zod, the former rulers of the colony. Tes was pregnant with their first child as they took up residence in the magister's estate.

Shortly after the appointment, Ak-Var and Tes had their child, a daughter named Thara. As was the custom of Kryptonian nobility, Thara added her father's name to her own and thus became known as Thara Ak-Var in the Kandorian Hall of Records.

Thara had a good life, though not necessarily the best upbringing. You see, Kandorians skewed toward militaristic and more than a little xenophobic (I mean, the House of Zod was the magistrative house of the colony for centuries). Thara was no exception to this and spent her childhood thinking aliens were filth. Thara believed it was her right as a Kryptonian to reign supreme. Even at a young age, she spoke of General Zod as though he were a war hero, rather than a war criminal.

When Brainiac attacked, seven-year-old Thara watched from the surface of Kandor as Krypton was destroyed. Afterwards, the fleet turned toward her own colony, but before she could comprehend what had happened, Thara's parents were killed in front of her by their own robotic servants.

Captured and immobilized, Thara would awaken much later aboard a starship of strange design. In time, Thara would discover that she had been cryogenically frozen by Brainiac as a means to archive the Kryptonian species and was now the female specimen of her race in Brainiac's menagerie. This experimental prison/nursery of Brainiac's contained children from a dozen other worlds.

Thara's male counterpart was Lor-Zod, the last son of Zod - the disgraced House which House Var had replaced. There was a little hostility between the two at first, but their present circumstances and Thara's xenophobia forced the two close together. Close enough that Thara confided in Lor-Zod about her intent to stage a rebellion against their captor. Trusting him with this information was risky. Lor-Zod had little desire to act against Brainiac. Nevertheless, Thara's wiles and charm proved strong enough to sway Lor-Zod toward her goals. Unfortunately, the coup failed. As punishment Thara and all the surviving children were put back on ice.

Thara spent most of the time over the better part of the next twenty-five years in cryogenic sleep. When she was thawed out, Thara found herself caged and usually alone. She became the subject of a number of experiments, most utilizing ores which Brainiac had collected from the remains of Krypton's core. The experiments gave Thara tremendous headaches and made her volatile. After the experimentation, Brainiac returned her to cryo-sleep.

Then Thara woke up, naked and confused, in a frozen wasteland. She mistook the planet for Krypton until she saw a yellow star in the sky illuminating the scattered debris of Brainiac's ship all around her.[1]

Thara was deserted on Earth's continent Antarctica. Despite her lack of attire, Thara was hardly hindered by the extreme temperatures around her on account of the direct exposure to the yellow star above. Still, getting clothed was her first order of business. As she traveled the white wasteland, she found other bits of scattered debris and people she mistook for Kryptonians rummaging through the wreckage.

Cautious, Thara observed them from a distance. This was easily accomplished as she found her senses heightened to an extreme. Though she could not understand the language they spoke, she recognized that they were salvaging what they could. Based on their uniforms, Thara rightfully suspected they were part of a military operation. When one of the other prisoners from Brainiac's menagerie approached the scavengers, they were sedated and captured. Seeing this, Thara was ready to flee when she saw one of the soldiers unearth a damaged cryopod that still contained a frozen Lor-Zod.

Unable to bring herself to abandon Lor-Zod, Thara shadowed the soldiers to their operating base. She infiltrated the compound, disguised herself in their clothes, and attempted to free Lor-Zod. When she finally found herself alone with the pod for a prolonged time, she was able to free the body from the pod with ease but could not find a way to awake him from his slumber. That is when Thara was approached by Thaddeus Sivana, who had been called in as a consultant by the U.S. military.

Sivana had seen Thara tear the pod open with her bare hands on the security cameras all around her (she didn't understand Earth technology, remember?) and assessed she was a Kryptonian. Having studied the aliens to some length, Sivana knew enough Kryptonian to put Thara at ease to allow him to approach and offer to help her friend.

Taken to Sivana's primary research facility in Fawcett City, Thara was taught English and the different cultures of the people of Earth, particularly the American people. She was also taught that on their planet she had extra capabilities than she did on her homeworld. She was taught to use them in exchange for allowing Sivana and his team to research her under the idea that the better they understood Kryptonians, the better they could help Lor-Zod who remained in a coma due to complications from the crash causing his cryopod to deepen his depth of slumber.

While research and training went underway, Thara entertained Sivana's talk of using her abilities to help the people of this planet while also helping his company generate revenue to further his research. Sivana explained that there were Kryptonians from the House of El that escaped Krypton's destruction and that they also lived on this planet as champions who were nothing more than puppets of a corrupt political engine. Thara agreed to help with his plan of forming 'Sivana's Salvation Syndicate' if he held true to his promise and helped Lor-Zod.

After several months, Thara was present for Sivana's fulfillment on their deal. Lor-Zod went berserk at first, tearing apart the lab and hurting the scientists around him. Thara intervened and was able to calm him down with her loving embrace and soothing voice.[2]

Fashioned into a media darling, Thara Ak-Var became Superwoman. Her original costume was designed to use the "S-Shield" of Superman, but Thara insisted that Sivana's PR team could not expect her to wear another Kryptonian House's sigil on her chest. The suit was redesigned to use the House of Var sigil instead.

Thara hit the ground running with the marketing for Superwoman and the Salvation Syndicate. She quickly became the team's public face and unofficial spokesperson. The chemistry between her and Ultraman (which was the name given to Lor-Zod) was a big hit with focus groups and Sivana was quick to center much of the attention on those two.

In the team's public patrols, Thara often stuck around to talk to the media while Lor-Zod would watch over captives and/or evidence until the police arrived. More than once, this left Thara and Lor-Zod without their team when members of the Justice League arrived. The first of these exchanges were hostile, as Thara was not one to beat around the bush and openly accused the Justice League of being too slow to respond due to their bureaucratic red tape. However, as time cooled her head and Thara was exposed to more news sources outside of what was prepared by Sivana's team for her, she began to see that the Justice League was doing more than her team was - particularly when it came to the Reach.

The Reach would end up being the biggest division between her and the Salvation Syndicate. Despite Thara's sheltered upbringing on Kandor, she had heard stories of the Reach. She had seen her parents planning Kandor's response in the event the Reach came to their world. Sivana's people arranged a visit with the Reach Ambassador for Thara. He assured her such concerns should die out as they had undergone a cultural shift since her childhood four decades ago, but Thara wasn't buying it.

Thara and Lor-Zod met with Superman and Power Girl discreetly to review the Justice League's investigation of the Reach, which included damning evidence that Sivana had ties to a group of power brokers known as the Light. That alone settled it for them and they broke ties with the Salvation Syndicate immediately, hiding at the Fortress of Solitude and undergoing a less slanted education of Earth's history, overseen by Kelex.

Shortly after arriving at the Fortress, Thara was recruited by Superman and ARGUS agent Alex Danvers to undergo a makeover to help bring the murderer of Linda Danvers to justice. At Agent Danvers' request, Thara assumed the identity of her murdered sister to lure Clyde Phillips out of hiding. Once Phillips was caught (and confused by Linda seemingly alive), Alex asked Thara to continue the charade.

Once Lor-Zod's own identity was created, Thara and him moved to Metropolis and began a life together. As Linda, Thara began working at the Ace O'Clubs after hitting it off with its owner, Bibbo.

Thara would return to heroics when Doomsday beat Superman into submission. She and Lor-Zod donned Kryptonian bodysuits prepared for them by Kelex, affixed with the House of El sigil. Thara still had her own reservations about wearing another House's sigil, but she dropped such protests when a recovered Superman welcomed her to the family.[3]

Thara is a bold and confident Kryptonian woman. She comes from a militaristic, politically conservative upbringing before Kandor's ruin. She remains somewhat distrustful of alien species due to her own parents' xenophobic teachings, but her work with the Advena Legion is dulling that philosophy as is her adjustment to life on Earth.

More than anyone else, Thara is close to Lor-Zod. They are soulmates and rarely have any secrets between the two of them. This was never more obvious than when Lor-Zod's own parents Dru-Zod and Ursa tried to bring him to their side. Lor-Zod almost gave in, even refusing to listen to Superman. In the end, it was Thara who was able to convince Lor-Zod that it was Dru-Zod, and Kryptonians like him, were what brought about Krypton's end, even more so than Brainiac.

When enjoying time with Alex Danvers or the Danvers family, Thara has little difficulty playing the part of Linda. Thara's natural personality is quite similar to what a teenage Linda Danvers was and thus it appears to convince Fred and Sylvia that their daughter is getting better. Thara had difficulty lying to Fred and Sylvia at first but Alex assured her this was for the best as the truth could literally kill Fred Danvers. 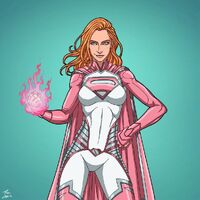 Matrix
Add a photo to this gallery 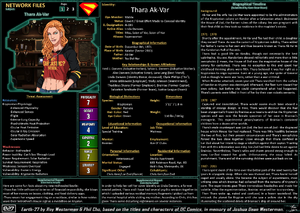 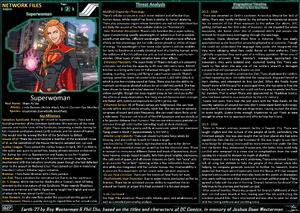 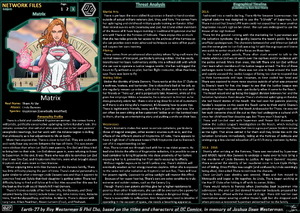 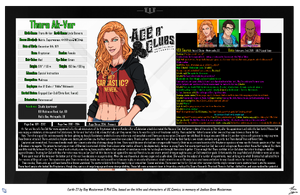 Oracle Files: Thara Ak-Var 1
Add a photo to this gallery 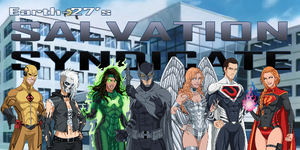 Salvation Syndicate
Add a photo to this gallery

Retrieved from "https://earth27.fandom.com/wiki/Thara_Ak-Var?oldid=118246"
Community content is available under CC-BY-SA unless otherwise noted.