Named after his maternal grandfather, Sam was never meant to have a peaceful life. He was only six months old when he was dragged into the world of the occult when a demon let itself into Sam's nursery and dripped its infernally tainted blood into the baby Sam's mouth. Mary came upon this scene and tried to interfere, but was killed for her intrusion. John Winchester heard his wife's screams and ran in to find Mary on the ceiling, dead, and the room engulfed in flame. Sam's four-year-old brother Dean carried baby Sam out of the burning house.

For the first six years of his life, Sam was often left in the care of Dean in motel rooms. At six, Sam demanded Dean tell him what their father did. Dean told him that their dad was a real-life "superhero."

While staying with his father's friend, Bobby Singer, Sam was given an amulet to give to John. However, when Sam grew tired of the way his father treated him, he gave the amulet to Dean instead as a Christmas present.

While living with Bobby Singer off-and-on while John and Dean were on the road training Dean as a hunter, Sam befriended a Zȃnă named Sully, believing him to be an imaginary friend. Sully helped Sam cope with his feelings of being neglected by his father. Sam embraced the opportunity to live the kind of life living on the road doesn't allow. Sam played soccer and won a local championship.

While celebrating the Fourth of July, Sam and Dean set off a box full of fireworks near Bobby's house and nearly burned the field down. Upset by this, Bobby told John to take his boys back.

Sam became a Mathlete in school. On occasion, he used the school library to assist Dean and John in the field, doing research for them. While researching kitsune at the library he met a girl named Amy and befriended her. They kissed, but eventually Sam realized Amy and her mother were the Kitsune that John and Dean were hunting. When Amy killed her own mother to protect Sam, Sam let Amy go. Fearing his father would find out about Amy, Sam ran away to Flagstaff, Arizona and tried to live on his own. He lasted two months before calling Dean.

Sam finished high school and then halfway into summer made it clear to John he no longer wanted to be a hunter, showing an acceptance letter to Ivy University. Sam began college and started dating Jessica Moore. He was about to enter law school when Dean surprised him.[1] 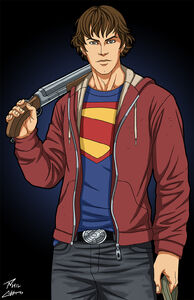 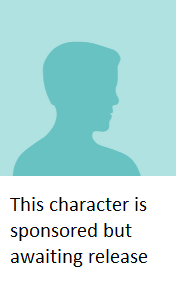 Sam Winchester (Variant)
Add a photo to this gallery 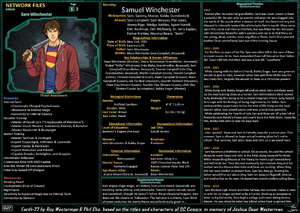 Network Files: Sam Winchester 1
Add a photo to this gallery 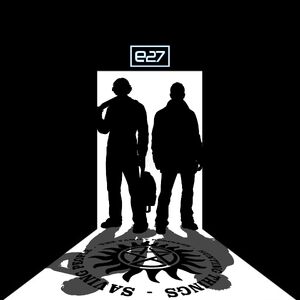 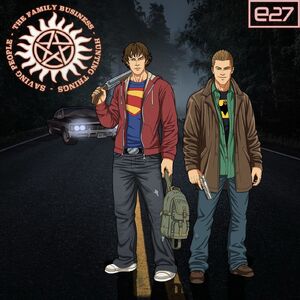 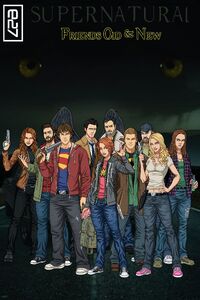 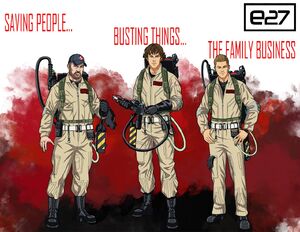 Supernatural (Ghostbusters)
Add a photo to this gallery

Retrieved from "https://earth27.fandom.com/wiki/Sam_Winchester?oldid=118805"
Community content is available under CC-BY-SA unless otherwise noted.