Roxanne is the older of two daughters born to Dick and Paula Sutton of Granville, Kansas. Roxy and her sister Kathleen spent a lot of time tinkering in their father's auto-body repair shop. While both sisters had a love for the mechanics, Roxy's interest was also fueled by her love to use the machines to engage in dangerous antics.

As a young girl, she nearly got both Kathleen and herself killed. The sisters ground up meteor rock, mixed it with petrol, and filled a motorcycle engine with the mixture. When the sisters got out of the hospital, Kathleen became more reserved and quiet. The opposite happened to Roxy, she only became even more determined to chase adrenaline at any cost.

Following that rush, while trying to make a living at the same time, Roxy made her way to Star City's Glaberton district. She had planned to be an action star, but when she learned that most insurance companies weren't willing to cover her with the risks she wanted to take, she instead became a stunt-woman.

Roxy's WCDB (Web-Cinema Data Base) page is like a highlight reel of the best action movies of 2002 to 2007. In a short time, Roxanne Sutton was the biggest stunt-woman in Hollywood, covering for various actresses and on occasion, several men. But the fame meant little to Roxy, her main reason for working was that she enjoyed the adrenaline rush and the thrill provided when engaging in the dangerous stunts. Eventually, even her stunt company's insurance plan forbade her from taking the risks she sought and after she went ahead with the stunt anyway, she was fired and blacklisted.

Unable to work in Star City anymore, Roxy went to find a better source for her entertainment: Gotham City. Roxy had been a past patron of the Iceberg Lounge and knew Oswald Cobblepot offered special services to his more distinguished clientele. Roxy figured he was the guy who knew the right people in Gotham.

Roxy began working for the Penguin. She started off stealing jewels for him and then escaping on her custom-made rocket which was an improved version of the contraption she had made as a child. During Gotham's Cataclysm, Roxy was unstoppable and she became wealthy.

Because Roxy usually put her own life at risk during her crimes, many vigilantes did not consider her a priority. But eventually Batman took significant risks to stop her crime spree.

When she realized the effort and commitment displayed by Batman, Roxy thought she had found someone who enjoyed the thrills of living life dangerously. She believed Batman was a kindred spirit or possibly even her soulmate. When Batman rebuffed her forward advances, Roxy orchestrated a joint suicide aboard her rocket bike, wanting to go out with a bang (figurative or literal). Batman broke Roxy's heart when he leaped off the rocket with Roxy in tow, only to revealed he had a parachute hidden under his cape. Slapping cuffs on her wrists, Batman grounded Roxy Rocket - dropping her off in Arkham.[1] 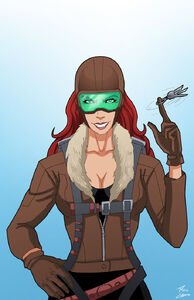 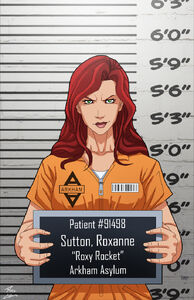 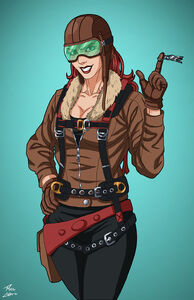 Roxy Rocket (Enhanced)
Add a photo to this gallery 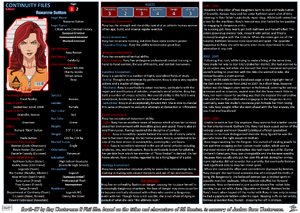 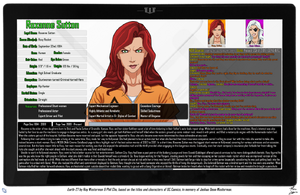 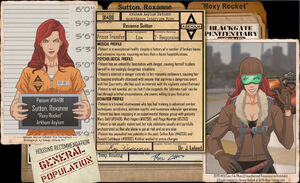 Arkham Files: Roxy Rocket
Add a photo to this gallery 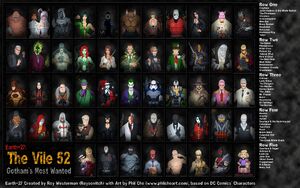 The Legends
Add a photo to this gallery

Retrieved from "https://earth27.fandom.com/wiki/Roxanne_Sutton?oldid=117946"
Community content is available under CC-BY-SA unless otherwise noted.