CRIME (Member, via Sons of Barbatos)

For the first twelve years of his life, Maxence didn't do much. His father had left before he was born and his mother died in childbirth, leaving her albino son to be raised by one of his mother's co-workers, a stripper named "Juniper" - not her real name but the only one he had ever heard her referred to. As he preferred to be called 'Rob' over Maxence and Juniper respected that, Rob never saw a need to learn her real name... besides that, he usually just called her "mom".

Due to Rob's very pale skin and light-sensitivity, he was mostly kept indoors at the motels or cheap apartments he and his surrogate mother would call home. Every two or three years, Rob and Juniper would go on a "road trip", which was actually Juniper ditching town to avoid creditors, and it would end with them settling in a new town.

Rob didn't do much school, getting most of his education from the TV and whatever life lessons Juniper's co-workers would give the pasty white boy. Needless to say, Rob had a skewed view of life.

While working at the Boom Boom Room in Star City, Juniper spotted Rob's father and she confronted him. Upon threat of violence from Juniper, Jeff Smith agreed to take the boy. Rob didn't like his dad or Jeff's pregnant wife. After a week, Rob decided it wasn't going to work out and ran away. After a few days on the street, he found his way to the Boom Boom Room, only to find that Juniper had skipped town.

When Rob came back to his dad's house, he was deflated and angry. His dad didn't do much to counter that resentment, but his wife got through to Rob when she explained she had come from a troubled life as well. When Rob's father skipped out on his family again, Rob stuck around to be the "man of the house" and help Jessica with her baby.

Rob liked being a big brother to his half-sister Jennika, though that's not to say they didn't have their moments of intense sibling rivalry, especially as Jenny got older.

When his stepmother got sick, Rob decided to enlist in the army. He'd planned to send money home, but in an attempt to make funds last longer, he got embroiled in a gambling scheme right after boot camp. While awaiting his court martial, Rob and his cellmate Don Jones broke out of the military stockade and fled across country to Star City.

Rob found his neighborhood ravaged by an earthquake upon his arrival, with his stepmother among the dead. Reuniting with his young sister, Jenny, Rob turned his stepmother's home into a hideout for earthquake orphans and delinquent runaways.

A raid on the house broke Rob and his sister up as Rob managed to fight his way to the garage where he and Don took off on motorcycles. The two ended up in Central City where they fell in with the crew of the one and only Captain Cold.

When their boss was arrested by the Flash, Rob and Don took off with the loot from past heists and returned to Star City to bust Jenny out of jail, only to find she'd already done so herself.[1]

Thinking that Jenny likely allied herself with some of the criminal gangs in Star City, Rob and Don went looking for her. Though they didn't end up finding her, they did end up falling in with the Purple Dragons for a while.

The Dragons' leader, Hun, convinced the two nitwits to invest their cash in the gang in exchange for the promise of rank and prestige in the gang. Only Hun never intended to follow through with that promise and when Rob and Don got smart to his plan, the pair confronted him during a gang meeting. Hun gave the pair two options: "deal with it" or "do something about it". The pair decided to do something and challenged Hun to a fight for control of the gang. Hun accepted their challenge, even telling the two to attack him at the same time. When they did, Hun made short work of them and had his men drive the men to Jump City where Rob and Don were left naked and penniless.

It took them several months to earn enough cash to get the resources and work up the courage to go back to Star City to seek vengeance, however as they were rolling into town on their bikes, the sky turned red and the cackles of a thousand demons haunted the wind, prompting the two to turn around and open the throttle in the opposite direction.

Rob and Don ended up in a bar near Keystone City, working as errand boys and handymen. But when they heard their old friend Snart was out of prison and looking for them, they got back on their bikes and drove to Gotham to join up with the Sons of Batman after having befriended a few over their many hours of motorcycling across the country.

As prospect, Rob and Don became tired of always being made to do all the hard work and undesirable tasks. The two convinced each other they deserved more and were easy targets for Mutant to persuade into joining his efforts to overthrow Jean-Paul Valley and install Joseph Blackfire.

Shortly after Blackfire allied himself with CRIME, Rob and Don were told by a masked Foot Clan ninja to get out of Gotham before the "reckoning", but Rob and Don didn't heed the warning until after Valley took Blackfire's head. With Mutant skipping town and leaving Rob and Don to take the fall, the pair decided it was the best time to get as far away from Gotham as they could.

Somewhere between Gotham and Midway, Rob realized that the foot ninja who had given them a warning was his little sister Jenny. Without a better idea, Rob and Don decided to go back to Star City and join the Foot.

With concerns Hun would recognize them, Rob and Don rebranded themselves with music themed names and eye-catching disguises. They had plans to start their own gang when they heard of the Foot offering some cash incentive for some volunteers for an experimental procedure. The pair eagerly signed up, despite more warnings from Jenny.

Upon completion of the procedure, Rob was gone and in his place was the mutant rhinoceros powerhouse known as Rocksteady. Swearing loyalty to Shredder, this two-bit thug is now a two-horned behemoth.[2] 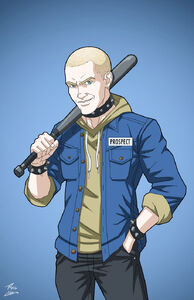 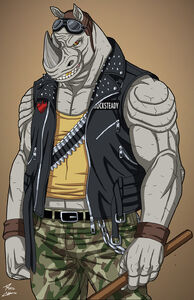 Rocksteady
Add a photo to this gallery 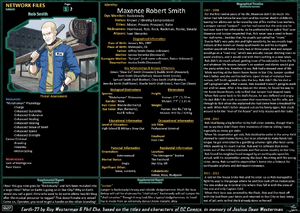 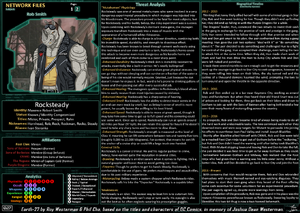 Network Files Rob Smith 2
Add a photo to this gallery 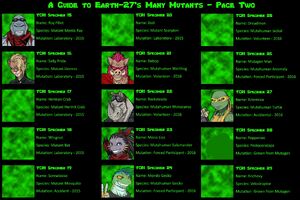 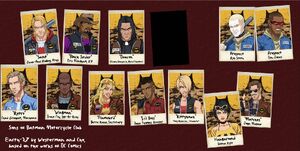 A Bunch of No-Good S.o.B.'s
Add a photo to this gallery

Retrieved from "https://earth27.fandom.com/wiki/Rob_Smith?oldid=119311"
Community content is available under CC-BY-SA unless otherwise noted.