The "Super Friends" first encountered this guy when Batman called Superman, Wonder Woman, the Flash, Green Arrow, and Black Canary for their first big six-hero team up. Batman explained he needed their help to shut down a terrorist plot wherein the League of Assassins and the HIVE were planning something big. This was the first time the Safinat Dakhma and the HIVE had agreed to work together after a considerably long rivalry. Batman figured he could exploit their hatred by interrupting an arms trade between the two.

When they crashed the arms deal, they found they weren't the only ones who planned to make a scene at this transaction. Prometheus showed up in a prototype version of his armor and while the Super Friends were busy exchanging blows with the HIVE and Safinat Dakhma security forces, Prometheus made off with Queen Bee's merchandise and Ra's al Ghul's money.

When reviewing what happened, Batman revealed that the masked man was a mysterious figure he'd recently learned about through Interpol. Not much else was known about him other than his name and that with each appearance he seemed to have upgraded his suit based on past mistakes or the technology he had stolen in his last hit. The scary thing about this time was the tech he stole from HIVE seemed to be deliberately designed to counter Batman, Wonder Woman, Black Canary, and the Flash.

Sure enough, next time we saw Prometheus he had incorporated those weapons into his armor. He easily dispatched the Super Friends, but made the critical error of underestimating and taunting Oliver, who improvised a bow shot (despite his broken arms), which hit the sonic dampener on Prometheus' suit and allowed Black Canary to blast him out of the building.

Prometheus stayed out of America for the most part following his defeat, though he did occasionally do one-off jobs for Werner Zytle that stood a good chance of giving him a chance at getting even with Green Arrow. It was this rivalry between this criminal and the archer which Ra's al Ghul decided to capitalize on when framing Prometheus for the murder of Roy Harper by leaving Roy's severed arm in the carnage of a terrorist attack in Europe which Prometheus had already taken credit for. When Interpol found the arm and tested its DNA, the Hall of Justice got the notification. Upon seeing it, Oliver flipped out and after drinking his weight in whiskey decided to go on a "safari" to clear his head, except Ollie didn't go to Africa. In Europe, Oliver found his old buddy Tommy and recruited him in the manhunt.

The two archery buddies found Prometheus' lair and though this armored fiend bested Green Arrow, Tommy was an unknown element whose recent depression made him a man with little left to lose. When Prometheus tortured Tommy to get to Oliver, Tommy grabbed an explosive arrowhead and jammed it into Prometheus' visor. The blast left Tommy near-death, but it took the head and helmet clear off Prometheus' shoulders. Good riddance.[1] 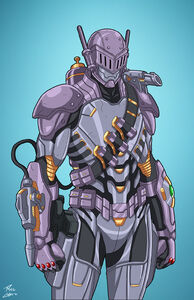 Prometheus
Add a photo to this gallery 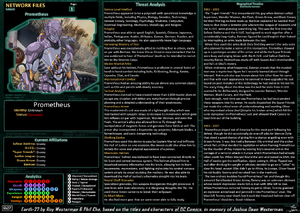 Network Files: Prometheus
Add a photo to this gallery

Retrieved from "https://earth27.fandom.com/wiki/Prometheus?oldid=118518"
Community content is available under CC-BY-SA unless otherwise noted.