Known to the Authorities

Sarah Scofield worked as a 'house concubine' for some organized criminal gang. In 1988, Sarah became pregnant. Once her condition started to show, she became a bartender at one of her employer's clubs. That proved difficult for Sarah as she was mentally ill and was practically illiterate. Despite her difficulties, Sarah manage to deliver a healthy boy.

Nathan Scofield was often neglected by his mentally ill mother who was too ill-equipped to handle raising a child at all, let alone on her own. Nathan was often left in the care of his mother's working girlfriends or locked in a storeroom with some toys. As a result of this lack of attention, Nathan developed an obsessive need for attention and began acting out.

While throwing a fit one evening, Nathan fled from his mother as she tried to rein him in. The boy ended up bursting into a meeting between his mother's crimelord employer and a well-dressed man whose smile immediately calmed the young Nathan. As Nathan's mother tried to take him from the room, apologizing profusely, she was struck by her boss who was upset by her interruption. Seeing his mother fall back and hit her head on the edge of a table, Nathan let out a scream which got him slapped by the gangster, whose ring left a gash across Nathan's right eye.

Before the child could wipe the blood from his eye, the gangster and the three men paid to protect him were dead. Before Nathan could see his mother's lifeless body, he was picked up and carried from the room by the well-dressed man, who covered their tracks by rigging the stove in the kitchen to explode.

On Nathan's first trip on an airplane, the well-dressed man identified himself as Malcolm Merlyn. Rescued from a life of mediocrity, as Merlyn would put it, Nathan would be taken to 'Eth Alth'eban and raised by one of Nyssa al Ghul's handmaidens, Mei Gulong.

He eventually was conscripted into a training camp and forced to train as an assassin. He developed a style that clearly emulated Merlyn's love of flair, distraction, and trickery - but after a childhood accident with a bow and a flayed forearm, Nathan was hesitant to train with a bow. Interested in swaying Nathan's idolatry from his rival, David Cain took a liking to Nathan and taught him the fundamentals of marksmanship.

Ultimately, Nathan ended up developing his own style that paid homage to both Merlyn and Cain. When it was time for him to be tested, Nathan was sent to Star City in the midst of its Undertaking. He was not prepared for what it meant to take a life. Still, he earned his new name.

When Nathan returned, he may have been unharmed, but he was very damaged by what he had done. The damage would slowly worm its way through his mind. Nathan's behavior became increasingly erratic until he was sent on a prolonged mission with Rina Nishida. Nathan felt this femme fatale had a calming effect on him and gave him clarity. But what Nathan called 'clarity,' everyone else called a 'full-blown mental break.'[1] 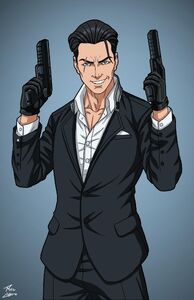 Alpha
Add a photo to this gallery 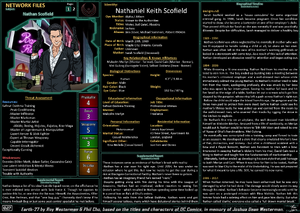 Network Files: Nathan Scofield 1
Add a photo to this gallery

Retrieved from "https://earth27.fandom.com/wiki/Nathan_Scofield?oldid=119303"
Community content is available under CC-BY-SA unless otherwise noted.