In the ‘90s, Lucius Fox took a position at Atwater Air as the VP of European Operations, headquartered in Paris, Lucius’ innovative ideas and planning helped save the small airline from bankruptcy and turned it into one of the top ten aerospace firms in the world, all in a manner of years. Due to his meteoric rise in the commercial market, Lucius had drawn a great deal of attention. It came to a surprise to Lucius, however, that some enemies sought him dead and had sent an assassin to end his life. Lucius survived the attack however and left Paris to return to the States immediately after his recovery. Shortly after his return, Lucius was offered a job at Wayne Enterprises by the recently appointed CEO, Bruce Wayne.

Wayne nominated Lucius Fox to take his place as CEO. While Lucius hasn’t been to any meetings in the Batcave or anything; he’s a smart guy. He has hinted that knows all about Bruce’s nightlife. Also, Bruce has tried to get Lucius as a more official ally; but he seems to like having some deniability and tends to play dumb and talk in code when such matters are discussed.[1] 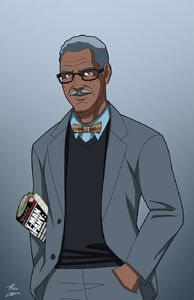 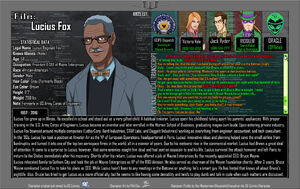