John Henry Irons was born in the depths of Metropolis' Suicide Slums. Times were rough and John was expected to pull his weight at an early age. At five years old, John would babysit his younger brother Clay whenever both his parents were out working their back-to-back overtime shifts or second jobs. One night, when John was seven and Clay was four, their parents never came home. The next day, when the police had discovered his parents’ murdered bodies, John and Clay were taken away from the only home they ever knew and would eventually got to live with their grandparents. Butter and Bess were good, honest, and hard-working people that took good care of their son’s children, but despite their example, John grew up thinking that the only way he could protect himself and those he cared about was to become rich and powerful.

Shortly after college, John learned that Bess was diagnosed with MacGregor’s Syndrome. As there was hope of recovery in the early stages if one could afford the costly treatments. John got a job at the local AmerTek factory as a weapons designer. John made a fortune by doing what other ballistic expert had deemed impossible: reverse-engineering weaponry from the Brainiac invasion of 2004. John was also able to improve on the design and launched a new highly profitable weapons series known as the BG (Beam Gun) line. While he hated knowing that he was making weapons, John justified it as his success allowed him to afford the best medical care possible for his grandmother, allowing the strength to overcome MacGregor's.[1]

After a chance encounter with Superman, John Henry Irons discovered that prototype models of his weapons had fallen into the hands of some of the local gangs in Suicide Slums. John had ordered all prototypes destroyed as they were completely untraceable, lacking the identification technology integrated into the final design. John testified against his employers in a Senate hearing, dropping AmerTek's stocks. John didn’t care about that as he had more than enough to live off comfortably and decided to quit. Shortly after the hearing, John’s house was shot up by gangs using the BG-60s. John managed to take out a few thugs and use their weapons to fight back; scaring off the rest of the gang; but his grandmother Bess had been killed.

Working out of a workshop in his brother’s salvage yard, John built himself a suit of scrap metal and recycled electronics, not that you’d know it by looking at it. As he built his armor, he was reminded of his chance meeting with Superman and their conversation about his namesake, the folk hero John Henry, so he added an homage to both heroes by slapping a big ol’ "S" on his chest and arming himself with a sledgehammer that he had upgraded with some fancy tech to make it hit with ten times the force.

In the course of a single week, John Henry Irons had earned attention of the media, who had dubbed him the second Man of Steel after he single handedly took down the gangs using his weapons. However, after his week-long crusade was over, while John was in the midst of melting down the armor and hammer, Superman tracked John down. The Kryptonian had realized that John was this new Man of Steel character, but to John’s surprise, Supes hadn’t come to talk him into surrendering to authorities. Instead, Superman asked for John’s help with the Fortress of Solitude, having seen John’s resourcefulness with alien tech. After seeing the Fortress’ tech, John got an idea for a second, upgraded suit and an even bigger hammer. Using the name “Steel”, John Henry Irons joined the Justice League.

Recently, still feeling he had to redeem himself, John and his brother partnered with Simon Stagg to form a charity to build homes for the victims of AmerTek weapons and meta-crime.[2] 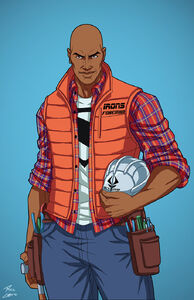 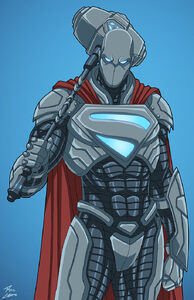 Steel
Add a photo to this gallery 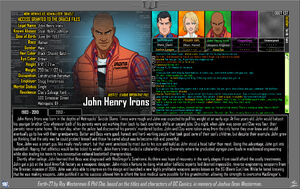 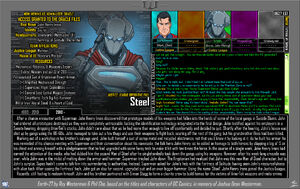 Retrieved from "https://earth27.fandom.com/wiki/John_Henry_Irons?oldid=119549"
Community content is available under CC-BY-SA unless otherwise noted.