Jefferson “Jeff” Pierce was born on April 13, 1970, in Suicide Slums, the worst part of Metropolis. Jeff was the son of Alvin and Leora Pierce and both of his parents encouraged Jeff to make something of himself and did all their meager income could to provide Jeff with opportunities to expand his mind. On Jeff’s sixth birthday, his father was gunned down in a grocery store robbery while picking up Jeff’s birthday cake. Shortly after his father’s funeral, Jeff’s mom killed herself and after a short stay in foster care, Jeff was sent to Brick City, Michigan to live with his father’s old friend, Peter Gambi. As a tailor of some skill, Peter had a considerable income and could afford to give Jefferson a proper education worthy of Jeff’s eagerness to learn. When Jeff discovered a passion and talent for running, Peter made sure that Jeff was given every opportunity to develop that skill, getting Jeff involved in his private school’s track and field team. Neither of them had any idea it would take Jeff to the Olympics.

At eighteen years old, Jeff would win the Gold Medal for the Decathlon at the 1988 Summer Olympic Games in Seoul, South Korea. Jeff never imagined his life would get any better than this, but following his homecoming, while in his Junior year of college at Ivy University, Jeff met Roselynn Stewart and the two fell madly in love and were married before either graduated. The pair moved to Brick City while Jeff commuted to nearby Midway City to teach at an inner city school. Shortly after, Jeff and Lynn had their first child, a daughter they named Anissa.

It was shortly after the birth of Anissa that Jeff was walking out to his car having stayed late after school to help a struggling student. In the empty parking lot, Jeff was hit by a bolt of lightning, stopping his heart… for three minutes. You see, as Jeff was struggling to breathe, he slammed his chest and to his surprise a blast of electricity shot from his hand and got his heart pumping once more. As he began to crackle with more intense electricity, Jeff panicked and went to the only man who he could think of for help: his adopted father, Peter Gambi.[1]

Peter Gambi helped Jefferson use some breathing exercises to cease the electrical discharges and thereafter, Peter proved himself crucial to helping Jefferson contain and develop his new powers. It didn’t take much training before Jefferson began finding ways to secretly use his powers to help people (jumping cars, scaring off criminals and bullies, and even once providing power for a hospital during a winter blackout). All of this happened in a time before the rise of Batman or the surge of metahuman activity, so Jefferson kept a low profile.

Having shared his secret with his family, Jefferson was able to practice and develop his powers in the basement of their home. Jefferson was always pushing himself to new heights, having felt he had been given these powers for a reason. The revelation of his purpose came to him when he saw a news report that confirmed the existence of the Batman of Gotham.

Within months, Jefferson and family moved to Gotham City, Jefferson tried for months to find Batman, but it was Batman who found him. Jefferson was eager to use his powers for good, but was shocked (get it?) to find out that Batman had no interest in training him. Batman explained that his own purpose was to strike fear, but Jeff was a teacher and should play to his own strengths. After the meeting, Jefferson took his lesson from Batman to heart. He had Peter design him a “super-suit” with a lightning motif and so was born: Black Lightning!

Jefferson set out to inspire hope and impact civic pride in Gotham’s youth, all while fighting crime. Jefferson took several years off regular patrol to help Roselynn raise their second daughter, Jennifer. Later, he joined the JLA at Batman’s request, steeped up to protect the Bowery and East End during the Cataclysm, and when his kids were old enough (and starting to display their own powers), Jefferson let them join the Titans as he joined the reformed Justice League. Recently, he has also made himself the “den dad” of the Outsiders, hoping to keep them out of trouble. All in all, I gotta say, he’s a pretty good dad, I mean, he’s no Jim Gordon, but then again my dad can’t recharge my smartphone with his fingertips… so… there is that.[2] 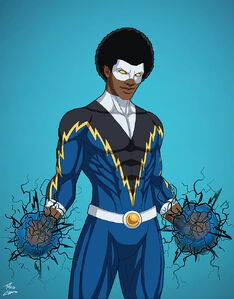 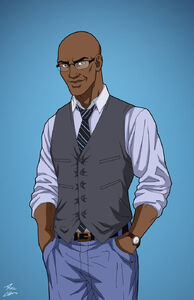 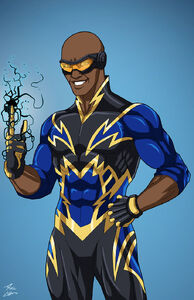 Black Lightning
Add a photo to this gallery 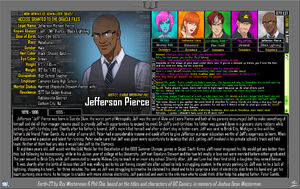 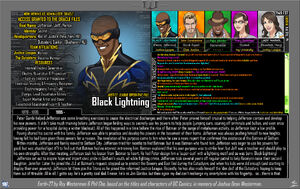 Oracle Files: Jefferson Pierce 2
Add a photo to this gallery 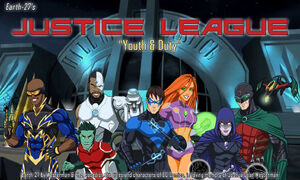 Justice League: Youth & Duty
Add a photo to this gallery

Retrieved from "https://earth27.fandom.com/wiki/Jefferson_Pierce?oldid=119617"
Community content is available under CC-BY-SA unless otherwise noted.