(Coexists inside the Dreaming & other locales on Earth)

Izzy was the second child of her mother, passing away during the delivery after being involved in a car accident. Izzy's older brother Hartley blamed Izzy's father for the death of his mother and tensions were always high between the two, teaching Izzy to be a peacemaker.

Another source for contention was Izzy's father was a reformed criminal who had discovered music in prison and wanted Izzy to study his craft. Hartley was deaf however and showed no interest in music, trying to urge Izzy toward more "concrete disciplines" such as science and mathematics. In the end, Izzy was a bright girl with a good ear and could have pursued either, but she chose music. That seemed to be the final straw with her brother and he moved out once he was old enough.

Izzy remained with her father, but she continually texted her brother. When she learned he had been working at the Particle Accelerator in Central City when it had its event and he was missing, Izzy channeled her anguish into her music and became an incredible artist, particularly with her favorite instrument, the violin (or "fiddle" if you're folksy like her).

When Izzy was sixteen, her father passed away. A friend of her father's came to the funeral and introduced himself to Izzy as Jay Garrick. The man told her he was so touched by her musical eulogy to her father. He told her she should enhance her talent through Central City's Academy of Arts and offered to do what he could to get her a scholarship. She politely declined and said her place was in Crucible.

After the funeral, while going through her father's things, she found an old piece of parchment with musical notation. Assuming it was a melody her father had penned, she grabbed her fiddle and played the notes. And then suddenly, Izzy was not alone. A voice began to speak behind her.

"How delightful. The Devil went down to Georgia. Sadly, not looking for a soul to steal. But you do have me in a bind - quite literally, and I am way behind, so let's get this over with and make a deal."

The tall blonde man was devilishly handsome, except for an ominous scar across his face. Izzy did not know what to make of him. She stood there, staring in silence and rarely blinking, with fiddle and bow in hand.

With a devilish grin, the man said "I see I've come upon a young lass with a violin this time around. So the usual deal then? Release me from this blasted spell and you can have my violin. Made of souls and hellfire. How about that, darling? What say you? Please be quick about it now..."

Izzy took the deal, released the devil from the spell she had accidentally cast, and tried to return the instrument. But to that, the devil declined, insisting that a deal is a deal. Izzy inquired as to where that spell came from. The devil did another deal, telling her its origin if she burned the incantation. Izzy did as she was asked and the devil told her a secret.

As the Devil was set to leave, bold Izzy pushed her luck and asked for one more deal. The Devil said she had nothing else to offer him, but when she began to cry, he settled for a favor he could ask of her later which she quickly agreed to in exchange for her brother's location. Smiling, the Devil left and Izzy got a text from the number '666' which gave her a Central City address. Izzy then set out on a hell of a road trip.[1]

This young girl rolled into Central City with only a violin (or "fiddle," as they say) strapped to her back and a few dollars in her pocket. She came to the address the Devil had given her and found her brother Hartley holed up with some criminal crew, laying low between heists. Izzy was shocked by what she had found, but her love for Hartley overwhelmed her urge to turn him in. In fact, once Hartley convinced his crew that she could be trusted, Izzy became fond of many of Hartley's criminal friends.

While she did not turn them in, Izzy eventually decided she did not want to join them. She contacted Jay Garrick and enlisted his help in enrolling her in the Central City Academy of the Arts on a musical scholarship. To say Izzy was something of a darling would be an understatement, within a year, she already had a record deal and was performing every weekend to sold-out venues or high-priced private concerts for the Central City elite.

When Izzy began a national tour on a summer break, Hartley and the Rogues used her place to crash. But their hideout was not as safe as they had hoped and when Flash and the others tracked them down, Izzy's house was destroyed in the resulting melee. When Izzy came home to discover this, she visited Hartley in prison and told him to forget she existed.

Following this, Izzy threw herself into her work. She became a huge hit. She won awards, she made music videos, she went on world tours. She almost became a household name... then it all turned to dust. Jack Ryder had heard of Izzy's connection to Hartley Rathaway and wrote an article on it. The article itself did nothing until it was picked up by G. Gordon Godfrey and blasted across the airwaves. Still, it did little to hurt her, until she made an appearance on "The Scene" and was ambushed by Godfrey on live television. Izzy chose her words poorly, trying to defend her love for her brother while also distancing herself from his actions. When Godfrey sensed weakness, he pushed a little more... and more. Izzy's anger got the better of her. She stood up from her chair and called Godfrey a "no-good rat" and just like that, Godfrey transformed into a rat on live television. Izzy herself was stunned and she ran off-stage. When security tried to stop her, she told them to "unhand" her and their hands became stricken with paralysis.

Izzy got away but was eventually captured by the DEO and confined for analysis by their CBI division. Izzy was cooperative, even after the Devil showed up in her cell to explain what happened. The Devil offered her an escape, but she turned him down. But she had a change of heart when Hartley and the Rogues showed up and performed a good old-fashioned jailbreak. Izzy decided to embrace the life of a Rogue.

For three years, Izzy operated as a criminal known as the Fiddler. She learned to use her witchcraft to aid the Rogues and combat do-gooders that tried to stop them. And then she got caught... but not by the police. Jay Garrick happened to be at a bank she was robbing and he convinced her to walk away. After a moment of reflection, Izzy did just that.

After a year adrift, living under an assumed name, the Six found Izzy.[2] 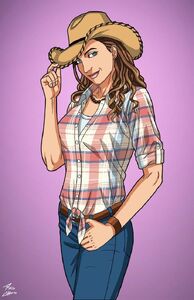 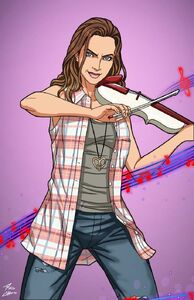 The Fiddler
Add a photo to this gallery 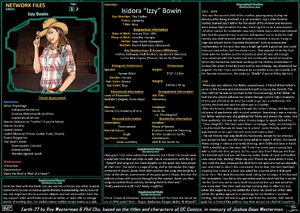 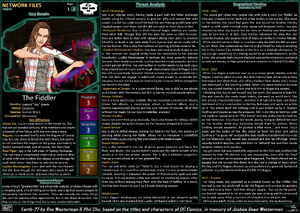 Network Files: Izzy Bowin 2
Add a photo to this gallery

Retrieved from "https://earth27.fandom.com/wiki/Izzy_Bowin?oldid=119004"
Community content is available under CC-BY-SA unless otherwise noted.