Iapetus was created by Gaia and Ouranos, with Gaia shaping his body from adamant and Ouranos giving his orichalcum heart stone the breath of life with twelve souls. Designed to be one of the four warriors of the Titans, Iapetus became known as the Bringer of Dusk and oversaw the lands to the west of Mount Othrys. To fulfill his duties, Iapetus' adamant body was clothed in red mythril armor and he gifted the Pillar of the West, a ferocious spear of mythril and orichalcum build with an adamant blade. Iapetus was feared more than most of his siblings, with Kronos' own reputation being the exception. As an example, in ancient language, Iapetus' name became the word for impaling with a spear and Iapetus encouraged its use as a way to spread his own legend.

Designed to be subservient to his brother Kronos, Iapetus took part in the murder of Ouranos and imprisonment of Gaia. Iapetus held down the right arm of Ouranos while Kronos dealt the fatal blow.

When he wasn't impaling his enemies or slaughtering his maker, Iapetus was a prolific lover. He took many daimons as lovers, siring Titanspawn such as Menoetius, Atlas, Buphagus, Anchiale, and the twins Prometheus and Epimetheus. Some of these children became champions of early man, but all of them became targets for the wrath of Kronos' offspring.

Anchiale betrayed her father and her brothers, falling victim to Apollo's charms. Anchiale allowed her lover and his twin sister Artemis into the palace of Iapetus in the early days of their war with the Titans. Artemis slew Buphagus for a past grievance and after having got their revenge, made off with Iapetus' daughter and set fire to the palace.

Iapetus never forgot this, nor did his sons. In the final battle, Menoetius singled out Artemis on the battlefield. Prepared to avenge his brother, Menoetius lost sight of his surroundings. Before he could strike the fatal blow upon the goddess, Menoetius was smote by the Thunderbolt of Artemis' father Zeus. As the gory remnants of his son still soaked the air, Iapetus charged into a skirmish with Zeus.

So consumed with vengeance, Iapetus did not fall back when Poseidon and Hades joined the conflict when Iapetus managed to disarm the god. Outnumbered, Iapetus focused on the deadlier Poseidon which allowed the cunning Hades to maneuver behind him and knock him off his feet. Before he could compose himself, Zeus claimed the Pillar of the West and sent its adamant blade into the heart stone of its master, releasing six of his souls. These souls became the first Titanic souls claimed by Zeus and his five siblings, giving them the power they would need to eventually take down Kronos and imprison all the Titans in Tartarus. Before he was sent to his prison, the Olympians stripped Iapetus of five more souls.

Iapetus escaped Tartarus after the fall of Rome. Hades and his Wild Hunt chased him to Elpida, but before Hades could drag him off the island, Gaia arrived to remind Hades that he was in violation of her sanctum. Rather than incur Gaia's wrath, Hades left the Titan to Gaia's care.

Gaia spent a long time helping her son recover from his permanently wounded heart stone and the additional trauma inflicted upon him in his imprisonment. In exchange, he became her champion: Captain Planet.

Captain Planet
Add a photo to this gallery 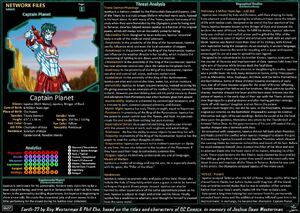 Network Files: Iapetus
Add a photo to this gallery 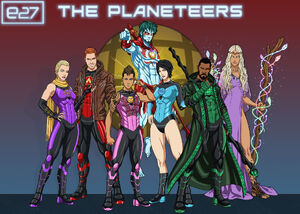 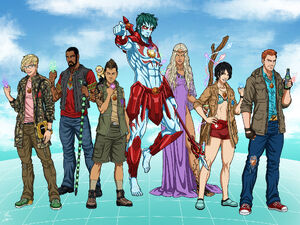 Captain Planet and the Planeteers 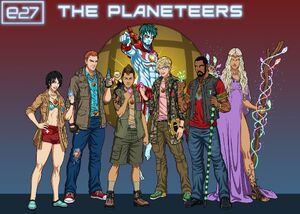 The Planeteers
Add a photo to this gallery

Retrieved from "https://earth27.fandom.com/wiki/Iapetus?oldid=118438"
Community content is available under CC-BY-SA unless otherwise noted.