Hayley Fitzpatrick was born and raised in the New Town district of Gotham City. She was the youngest of four children to an accountant father and corporate consultant mother.

Growing up, she did her best to fit in with her very straight-laced WASP family members, but she did feel as though she was not quite cut out for that lifestyle. However, Hayley never did explore those deviant urges except for a minor fling with a girl at an out-of-state cheer squad competition. This one experience convinced Hayley that she was into girls, but she would keep that part of her under wraps until she was in college.

At university, Hayley decided to embrace the opportunity to explore that hidden part of herself. She struggled at first, holding herself back out of fear of doing anything which would forever mark her with a label which would be viewed less-than-favorable by her family. But this hesitation kept Hayley in a depressed state.

After over two months, feeling as though she did not recognize the person frowning at her in the mirror, Hayley decided to paint a smile on her face and go to a Halloween party in downtown Gotham as a sexy clown. At the party, Hayley encountered another sexy clown and the two struck up a conversation about their costumes.

After some heavy flirting and light underage drinking, Hayley and her new friend, a political intern named Bianca, were thinking of ditching the party. Since Hayley's dorm had a pesky roommate, the two decided to skip out to Bianca's place in Park Row. The pair had just crossed the North Finger Bridge when the earth trembled and debris from surrounding buildings disabled Bianca's car.

The two got out of the car and headed North on foot, but were soon preyed upon as mass hysteria broke out and the general paranoia of Gotham citizenry turned to violence. The two young women running hand in hand seemed like some easy targets to some bikers, but when the girls were cornered, salvation came from an unexpected source--the Laugh Pack. The killer clowns had mistaken the girls for members of their own gang, but the girls went along with the ruse for a while out of fear and the promise of safety in the chaos of Gotham.

After several months in the camp of clowns, the two girls had forgotten their old lives. They had survived as members of the "Giggle Gang," support staff for the Laugh Pack. Bianca handled logistics while Hayley began fixing vehicles and gear, becoming quite the techie.

During the war with the new Red Hood gang, all of the Giggles were conscripted into service. Hayley based her new look on the identity of Harley Quinn--but with a high-tech slant to it. Ever since Joker saw her engaged in her favorite downtime activity, working on her yo-yo tricks, Hayley had been called Yo-Yo and she made the most of it by building her identity around that as well. Eventually stealing some high-tech gear to fashion herself her signature deadly weapon.[1] 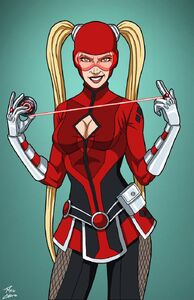 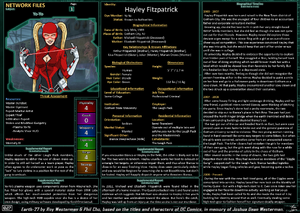