The daughter of Nick and Sharon Quinzel, Harleen Quinzel grew up in Gotham City on the island neighborhood of Tricorner, just down the street from my house actually. I do not recall much about her growing up, other than she was older than me and incredible smart. In school, some of my teachers would compare my intelligence to hers, remarking that we both were likely to go places because of our brains. I used to smile, being compared to Harleen… if those teachers only knew then what I know now about the mind of Harleen Quinzel. *shudders*

After graduating as valedictorian (having skipped a grade) at Tricorner High, Harleen Quinzel was one of the first recipients of the Thomas Wayne scholarship set up by Bruce upon his return to Gotham. The scholarship was given to those with high academic achievement who wished to pursue a career in the medical or mental health fields; and Harleen won Bruce and the Wayne Foundation panel over with high ambitions of working in Arkham Asylum and helping the mentally ill return to life as productive members of Gotham.

In college, Harleen Quinzel came out of her shell and became quite popular. In her junior year, after taking a few sociology courses and psych studies classes, Harleen Quinzel got a job at the Gotham State University’s radio to WGTC and began being broadcast all over Gotham and southern New Jersey. People all over fell in love with Harleen’s infectious personality and bubbly voice, including one regular caller that she had from nearly the beginning, in the show’s college days: one “Mister J” who would openly flirt with the host. When Harleen began interning at Arkham in her third year of med school, she was assigned a mentor, Dr. Byron Meredith, and began shadowing him as he made his rounds and held sessions. Of course, when Harleen first met the crazed clown calling himself 'the Joker', she recognized his voice right away… The Joker was her “Mister J”![1]

During Harleen Quinzel's internship, she convinced her mentor Dr. Byron Meredith to let her have unlimited access to the Joker for the purposes of her dissertation. In her sessions with the Joker, Harleen began to legitimately think she could help the Joker if only she could get him to trust her. However, in her attempts to connect with her patient, Harleen lost sight of the line between professional and personal. The more she began to understand the Joker, the more she opened herself up to him, until she realized she was falling in love with him. I think she realized she had crossed a line at some point as she began smuggling in contraband to help the Joker escape, but his escapes were short-lived and he kept coming back to Arkham, to Harleen. In their sessions, Joker confessed that he had come back just for her. For whatever reason, Harleen actually found this endearing and after helping the Joker escape nine times, she asked that the next time he escaped, that he take her with him… and Joker did just that, right then and there, he took Harleen with him… as his hostage.

While on the lam, Harleen’s transformation to Harley Quinn was completed through make-up, disguise, and a lot of torture: both physical and psychological. Harleen was present for the Internet broadcast of Jason Todd and after the on-air torture, when the votes were in, Joker let Harleen Quinzel prove her love for him as he handed her his switchblade. Whether or not she was the one to actually deliver the fatal blow remains a mystery as Jason was pulled off-camera, but we all watched as Harley Quinn carved the “J” into Jason’s face.

After years as Joker’s fight hand gal, Harley became a master criminal in her own right; recruited into both Task Force X and the Secret Six, as well as being a founding member of the Gotham City Sirens. Whatever the team, Harley seemed able to adapt to her environment and comrades. Still, no matter what the Joker had done to driver her away, she always came back to him: time and time again. Though she is currently in the midst of a crime-spree with her new lover, Pamela Isley, I suspect she’ll be back in the Joker’s arms by year’s end.[2] 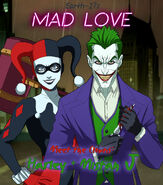 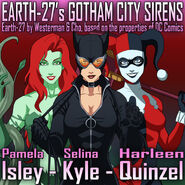 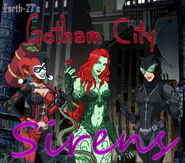 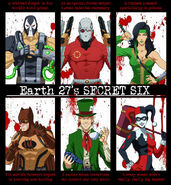 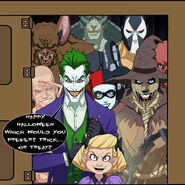