Pluto, The Unseen One, The Divine Warden (Aliases)

Ruler of the Underworld, God of the Dead, God of Mysteries, God of Wealth, Warden of Tartarus, Keeper of the Bident (Titles)

Lord of the Underworld

As the Titans' influence and power grew, the Titan Kronos chose to bestow his essence upon six followers. Hades was given the powers of obfuscation and insight, allowing him to comprehend great mysteries and given a helmet that would make him unseen. All this allowed him to become Kronos' Spymaster.

However, after the imprisonment of the primordial Gaia and Hestia, Hades began to conspire against Kronos. His efforts were halted as he was also imprisoned when he was found conspiring with three of his other spirit-siblings. While Hades and his other siblings sat in Tartarus, Hades' spirit-brother Zeus evaded capture thanks to the help of Rhea. For many years, Zeus made allies and fathered his own powerful children before leading a strategic strike against the Titans. Zeus broke into Tartarus and freed his spirit-siblings, including Hades.

After the prison break, Hades used his abilities to spy on the Titans, gaining intelligence against their enemy in the upcoming conflict. In the final battle, Hades joined Zeus and Poseidon in taking down Kronos.

After the defeat of the Titans, the Gods imprisoned those Titans that survived, stripping them of their excess essence in the process and divvying those extra powers up among the gods to fill roles that best suited their personalities and existing skills. Most of the gods agreed that Zeus should be their king and Hera, his queen, and so it was. Hades took control over the Underworld, as a God of Death and Mysteries.

Following the division of power, Hades began a secret affair with the daughter of Demeter, Persephone, having fell in love while they were gathering intelligence against the Titans. When the two decided to marry, Demeter was quite upset over the matter. Persephone nearly gave up on the whole relationship, but Hades introduced her to the Gardens of the Underworld and had her taste a Stygian Pomegranate. The sweet taste of the fruit was enough to convince Persephone that there was beauty in the Land of the Dead.

Hades and Persephone had three children, including one son known as Zagreus. By all rights of such an esteemed birth, the young God Zagreus should have been afforded all the luxury he could imagine, but his birth was a cursed one, having drawn in the tainted Stygian essence of the Underworld, which complicated his infancy. Despite his health issues, Zagreus lived to childhood and began to show an aptitude for using the same essence that plagued him. Hoping that fostering this gift would allow recovery from his frailty, Zagreus began to shadow Hades.

While Hades was accompanied by Zagreus in Tartarus, three Titans broke from their prison and knocked Hades aside. Before the god could get to his feet and arm himself, the trio of Titans tore young Zagreus limb from limb before his father's eyes. In his rage, Hades cast the Titans into oblivion. Afterward, among the cheers of the remaining imprisoned Titans, Hades cradled his dying son and wept. When the Thanatosi came to collect the boy's spirit and give him death, Hades used his powers to keep them claiming his son's spirit, thus unnaturally preventing Zagreus the mercy of death.

The Quorum of Six called an intervention to discuss Hades' abuse of his duty. Though the Gods agreed that Hades was in the wrong, Zeus chose a compromise instead of risking Hades' eternal ire. Using the dark magic of Hecate, Zagreus' heart was removed and made into a potion. Semele of Nysa, a willing priestess, then drank the potion, becoming pregnant. Just three days later, Semele gave birth to a fully divine child, dying in the process. In honor of her sacrifice, Hades renamed his reborn son 'Dionysius,' meaning 'God of Nysa.'

Hades played a significant role in the adventures of many Greek and Roman Heroes. He partook in many Wild Hunts to bring fugitive Titans to justice. Through it all he remained devoted to his wife and queen.

During the Reign of the Romans, Hades took on the identity of Pluto to further his cult. But when Rome began to fall to Christianity, Hades aided the plans to leave Earth and settle a new world to continue their cult.

Since the transition, Hades has worked hard to adjust his domain to work within the new metaphysical properties of Elysium. Because of this devotion and his talents, Hades is often called upon by his brother Zeus to handle the most sensitive inquiries and undergo vital missions.

Most recently, Zeus has tasked Hades with investigating the recent heretic movement in the Nation of Thebes known as the "Broken Book." 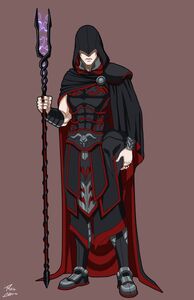 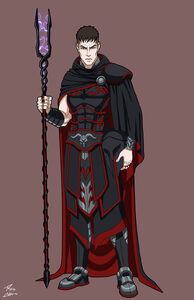 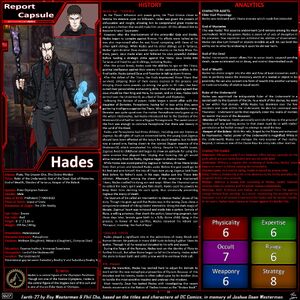 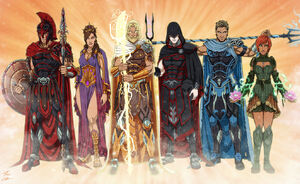