Dorothy Tan was born into wealth and luxury. Her family had a spacious penthouse apartment in Cherry Hill. Dorothy never had need to want for anything, as she was well provided for at all times. She had several tutors and, by the time she was nine, could speak three languages with perfect fluency.

Dorothy's life changed in 2007, as did the lives of everyone in Gotham. The Cataclysm struck and overnight the Tans went from the most secure and protected Gothamites to the ripest fruit just waiting to be plucked by escaped prisoners and criminal looters alike.

The Tans read the writing on the wall and fled their palatial home before the worst of the looting fell on Cherry Hill. They managed to find shelter in the Park Row Clinic, but even there they were not safe. Their exile was made more complicated by Dorothy's infant sister Dana, who had special needs due to her age.

As Dorothy's father was conscripted into service with the refugee community, repairing walls or manning lookout posts, Lauren Tan would often leave Dorothy to look after Dana while she ventured into the city to scavenge for baby supplies when the clinic's supplies were low. Against all odds, the Tans seemed to have weathered the worst disaster thrown at Gotham - until the end.

A month before Gotham returned to normal, Lauren Tan went on a simple supply run and never returned. After a day, Dorothy defied her father's orders and went searching for her mother. Dorothy found her mother, just three blocks from the camp, butchered in an abandoned apartment. She had found her mother in hours, but it took a search party two days to find Dorothy, still clinging to her mother's lifeless body and too traumatized to utter a word or shed a single tear.

Dorothy Tan spent the next five years in an expensive care facility. Dorothy responded little to treatment or other external stimuli, outside of playing racing video games, riding a bike around the grounds, and dancing to music.

On the eve of Dorothy's eighteenth birthday, a male patient known only as John Doe approached Dorothy during dinner and whispered something in her ear. The next morning, both Dorothy and the other patient were nowhere to be found.

Dorothy was next seen working in the ranks of Joker's Laugh Pack. Now calling herself "Dottie', Dorothy is often decked out in clown make-up, dressed in a polka dot dress, and operating as a maniacal getaway driver known to swing a vicious rubber chicken as a weapon.

It appears that Dottie is also involved in a relationship with another member of the Laugh Pack, specifically the criminal clown answering to the name "J-Man". Whether "J-Man" is the same male patient from Dorothy's escape remains to be confirmed, but it seems a safe bet.[1] 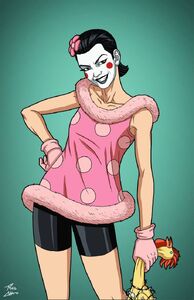 Dottie
Add a photo to this gallery 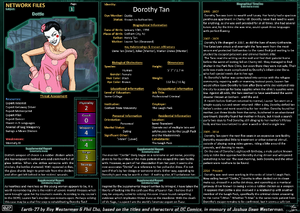 Network Files: Dorothy Tan
Add a photo to this gallery 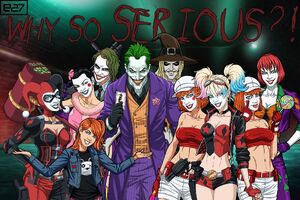 Laugh Pack
Add a photo to this gallery

Retrieved from "https://earth27.fandom.com/wiki/Dorothy_Tan?oldid=118978"
Community content is available under CC-BY-SA unless otherwise noted.