Donatello is the third-born turtle of a clutch found on my family's farm. For Donnie's shell, I used "Perplexing Purple."

While a test subject for mutagen, Donnie was subjected to a higher frequency of brain stimulation experiments than his brothers.

In their new lair, Splinter began to believe he was the reincarnation of a murdered ninja master and claimed Donatello was, likewise, the reborn son of Hamato Yoshi, Hamato Kenzou.

Not particularly aggressive by his nature, Donatello took a liking of the longer reach of the bo staff, as well as favoring it's defensive ability and it's utilitarian practicality. Donnie made ample use of his stealth skills, and even honing them further, by his frequent late-night scavenging missions, rummaging through the ruins of the burned husk of the building above the lair and even to the city beyond. Donnie made excellent use of the salvaged gear, making his own computer which he used to access the world-wide web and thus feed his immense curiosity further.

After the Turtles helped save many Star City citizens from a demonic infestation, the turtles disappeared into the realm of unsung heroes and whispered urban legends. Donnie didn't quite disappear as much as his brothers did as he developed a presence online. Using the name of 'Donald Tortuga', Donnie set up a fake identity and got himself a remote job as a technical support agent to earn extra cash to buy those parts he couldn't find in dumpsters. Donnie also began stalking me online, friending me on the Sentries of the Last Cosmos Online. I had no idea my clan's engineer was once my pet turtle... Seriously what is my life?

Anyway, I can't give Donnie crap about stalking me because it was the fact he was gaming with me when the Foot Clan attacked my father and I that Donnie was alerted and able to rally his brothers to our rescue.

Also, I should mention Donnie has shown me his lab. He's working on a fifth robotic Ninja Turtle! Yes a Totally Mechanical Ninja Turtle! Whoa!

Donnie is the brother that sees the world most pragmatically. He looks at the world according to numbers and tangible facts, and often discounts things that do not fit into the scientifically proven. This has caused some clashes with Leonardo, whose experiences and faith in Splinter lead him to believe in the supernatural. However, personal experiences have lead Donatello to gradually become more open-minded.

But that's not to say he doesn't know how to have fun. Next to Mikey, he's the most laid-back turtle, prone to playing video games and teasing.[1] 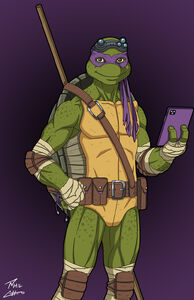 Donatello
Add a photo to this gallery 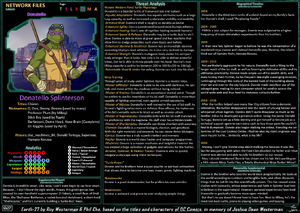 Network Files: Donatello
Add a photo to this gallery 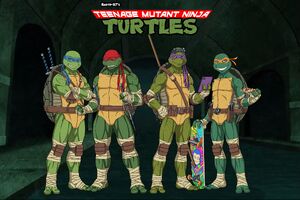 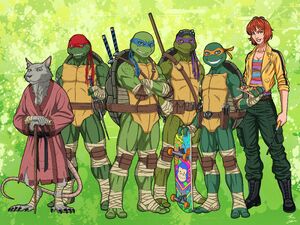 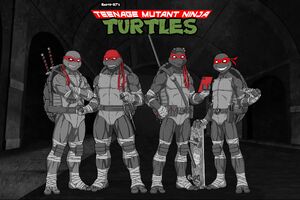 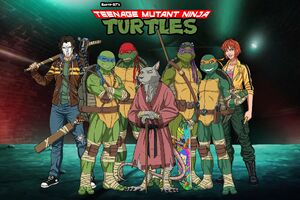 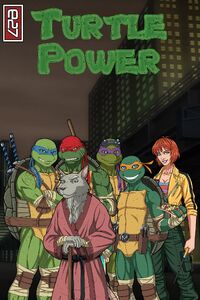 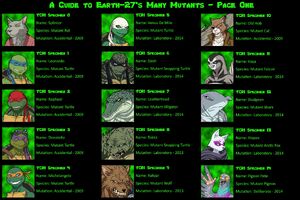 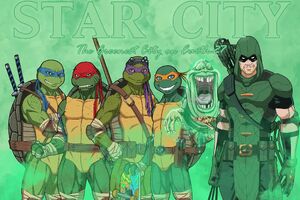 Star City: The Greenest City on Earth-27
Add a photo to this gallery

Retrieved from "https://earth27.fandom.com/wiki/Donatello?oldid=118987"
Community content is available under CC-BY-SA unless otherwise noted.