Delirium of the Endless

When Sentient Life Began to Delight

Lady of the Madness

Red (often has other colors as well)

Known to the ancients as Mania, Delirium is the youngest of the Endless. First incarnated as Delight, she became altered into Delirium for reasons even Destiny does not know. All that's known of those circumstances is that it was connected to a traumatic event some four billion years ago. Delirium usually appears as a young woman whose form changes the most frequently of any of the Endless, often changing her hairstyle and outfit mid-conversation based on the random fluctuations of her temperament. She has wild hair and eccentric, mismatched clothes. Her only permanent physical characteristic is one of her eyes is green and the other blue, but even those sometimes switch between left and right.

Often scatterbrained and easily distracted; she often forgets the thread of her conversations and comes out with offbeat and seemingly inconsequential observations. Among her older siblings, Delirium is closest with Death and Destruction but also gets on quite well with Desire and Despair. Delirium finds Destiny to be aloof and she is reportedly scared of Dream.

When Despair and Desire challenged Dream to who could exert the most influence over a mortal named Joshua Norton, Delirium took part in the same wager by way of cooperating with Dream to give Norton the illusion of being Emperor of the United States. Norton would later die and because Norton had never entered into the realms of Desire or Despair, Dream and Delirium won the bet. After this cooperation, Delirium felt a little more comfortable with her brother Dream.

At the Conclave of the Endless where Destiny announced the dawning of a new age, Dream was preoccupied with the transition of the stewardship of Hell to the Lords of Hell, and Destruction confessed his intent to self-exile, Delirium was too shocked to say much. She only wept as she felt her family was falling apart. When Dream later disappeared without notice, Delirium retreated into the Madness for most of the next decade.

When Delirium left her realm, she tried to steal the Book of Souls from her eldest brother. Delirium was convinced that the tome would have the location of Dream and Destruction, and Delirium was intent to find both of them. When she failed to break the chain from her brother's wrist as he slept, Destiny caught her by the wrist and urged her to confess her reasons for wanting his precious book. With tears of sap and wine, Delirium explained how much she missed her brothers. She went on to explained in one of her rare lucid moments that she feared that they had died and Destiny was keeping the information from the other siblings to protect them. When he denied this, Delirium asked for proof and so was accompanied by Destiny and Death to Litharge to prove that the brothers still drew breath to ease their concerns.

It's believed that Delirium spent the next ten years searching for her two missing brothers, spending most of her time on the mortal plane. Some believe she took up residence in New Jersey during this time and this seems to be supported in the sharp increase in mental illness in and around the Gotham area during this time.

Since the return of Dream, Delirium has tried time and again to urge her brother Dream to help her find Destruction. He ignored her requests as much as he could, but she was rather insistent that his experience in being missing was vital to the task and eventually she wore him down, agreeing to help him find Rose Walker if he helped her find Destruction.[1] 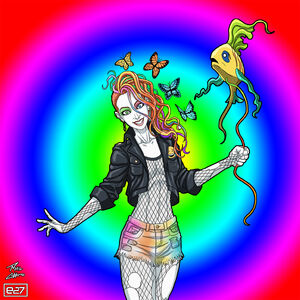 Delirium of the Endless
Add a photo to this gallery 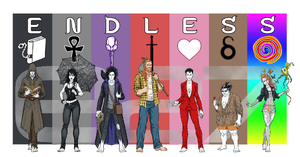 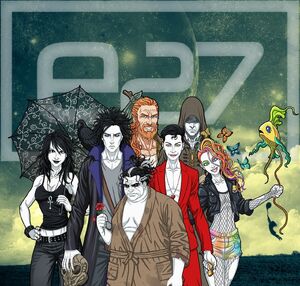 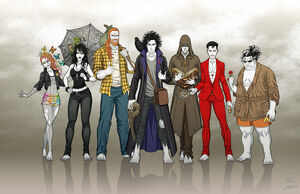 Endless
Add a photo to this gallery

Retrieved from "https://earth27.fandom.com/wiki/Delirium?oldid=119769"
Community content is available under CC-BY-SA unless otherwise noted.