Dana lost her mother at an early age and was raised by her father. As an only child of a wealthy father, Dana was treated as something of a princess and never really wanted for much in life: except adventure. Dana’s thrill-seeking was a large source of grief for her father, but Dana did not seem to care. In Brentwood Academy, Dana met Terry McGinnis. The obligatory bad boy in his group of friends, Terry intrigued Dana as he was the type of boy who had little regard for rules, but wasn’t a bully and would often get in fights or receive detention for fighting when he was only in the fight because he came to another’s defense. Dana first started her pursuit of Terry when she was nine or ten, but Terry was too young and too dumb to notice. Still, Dana found ways to work her way into Terry’s life.

When they were sixteen, Terry finally wised up to ask Dana out on a date; but on his way to pick Dana up their trip to the movies, Terry was arrested and sent away to Juvenile Hall for three months. Though, Dana never believed that Terry was guilty, her father didn’t agree, Dana was forbidden to see Terry, but that didn’t stop her. It was on their first date after Terry’s release that Jokerz caught sight of Terry and Dana. Terry had made enemies of the gang while he was in Juvie and though Terry did a fine job ignoring them, he took a swing at their leader when he made an unwelcome advance on Dana. Frightened, Dana watched as the five Jokerz attacked Terry but was relieved when Terry came out of the scuffle with nothing but a few bruises. They managed to salvage the rest of their date, but a week later Terry’s life was forever changed when upon return from their second date, Terry found his father murdered in an apparent Jokerz attack on their home.

Terry moved back in with his mom and little brother, but Dana and Terry still dated throughout high school… when Terry’s “work” with Mr. Wayne permitted. Though, Dana and Terry broke a few times, they always seemed to find a way back into each other’s embraces. So, when Terry decided to propose to Dana on the eve of their graduation, Dana was less than surprised. The surprise came moments later when Terry blurted out that he felt Dana needed to know he was Batman. Having found out Terry’s secret, Dana asked for some time and space. That was over a year ago… Though Dana hasn’t gone back on her “yes”, yet; she still says she needs more time.[1] 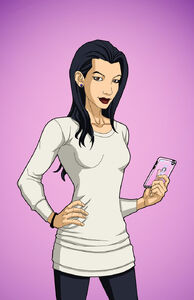 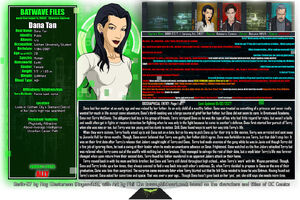