Damian is the only biological child of Bruce Wayne and Talia al Ghul. Damian’s parents were briefly married during Bruce’s training with the League of Assassins, but Bruce broke ties with the League before Damian’s birth. It is unknown if Bruce knew of Talia’s pregnancy at the time (as Bruce remains tight-lipped about his experiences with the League).

After Damian’s birth, he was sequestered within the League’s inner circle, his existence known only to those most trusted by Ra's al Ghul, with the threat of execution upon any who spoke of Damian to outsiders. Once of an age to learn, Damian was instructed by private tutors on all manners of subjects, both academics and artistic. By night, he was schooled in the ways of the League by masters within the order (Sandra Wu-San, David Cain, Jade Nguyen, Slade Wilson and even Ra’s al Ghul himself). When he was not being taught, Damian was given every luxury as he had a retinue of servants devoted to his care and his wishes. For all intents and purposes, Damian was the prince of Assassins.

As a teenager, Damian was initiated into the order under the name “Ib al Xu’ffasch’. It was here that Damian first met Tim Drake, another prominent initiate. They became immediate rivals, both competing to be named as Ra’s al Ghul’s steward (and both at conflict over who was the true “Son of the Bat”). Acting on a hunch, Damian shadowed Tim and learned that he was a traitor sent into their midst by the Batman; however, by the time of this discovery, Damian was unable to stop what Tim had set in motion. After the capture of most of the League’s commanders, Talia (who was spared capture by Batman) sent Damian to live with his father for his protection, as she tried to keep what was left of the League from in-fighting.[1]

It was difficult for Damian to adjust to life as the son of Bruce Wayne. Damian felt entitled as he was the “true son” of Bruce Wayne, finding his adopted siblings (Dick, Jason, Cass, and especially Tim) to be “pretenders” to Damian’s rightful position. So, it was that Damian arrived at Wayne Manor with a purpose: to show his siblings that he was the “one true son of the Bat.”

Within his first month in Gotham, Damian had ambushed each of his siblings and bested them in some manner. Though Bruce ignored this at first, as pointless sibling rivalry, he had to take notice when Damian put Tim in the hospital after challenging Tim to an impromptu sword fight. When Bruce scolded Damian, the boy only rebelled further, eventually running away.

Dick was the one who found Damian hunting down gangbangers in the Narrows. After getting Damian’s attention by defeating him in personal combat, Dick managed to talk some sense into the teenage miscreant, marking the start of Damian’s rejection of his League programming.

Following this, Stephanie suggested that Damian be given a chance to prove himself as Robin, passing on her mantle to the Anti-Christ himself (sorry, I meant “Damian.” Damn autocorrect). As Bruce had recently launched Batman, Incorporated at the time and needed to have Batman and Bruce Wayne make many public appearances together to defuse speculation that they were one and the same, Dick Grayson became Batman with Damian sporting a new suit fashioned with elements from all previous Robins (and some League influences as well) as his new Robin. Somehow, the team of a lighthearted Batman and ornery Robin worked.

Part of Dick's taming of the shrew required Damian to spend some time at Titans Tower and had enrolled Damian in the Academy where he made 'friends' (and so many enemies). Damian insisted he should be the leader on his very first day at the Tower and attempted to demonstrate that by disabling Cyborg and Red Tornado and then locking the Titans in the Tower as he proceeded to hunt them down one by one. He was eventually bested by Tim who just happened to be at the Tower in the capacity as a mentor while still recovering from the injuries Damian had given him.

It took a while for us to break Damian in and I actually give most of the credit to Alfred. Even though Damian shows the butler such disdain, it's easy to notice that Damian generally only makes such remarks about Alfred when he is nowhere in sight and I have also noticed that Damian is surprisingly well-behaved when Alfred is watching, especially if the butler has a wooden spoon in hand.

Having attended Brentwood Academy, Damian made friends with my mini-me: Carrie Kelley and he has actually done a lot to help her train to meet the demanding role of Batgirl. Now that two have graduated, it remains to be seen what they'll do or where they'll go, but both seem uninterested in college, at least in the immediate future. I suspect they will be spending more time with the Titans, trying their hands at fighting crime full-time. [2] 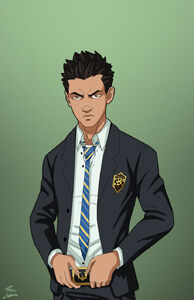 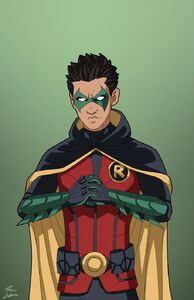 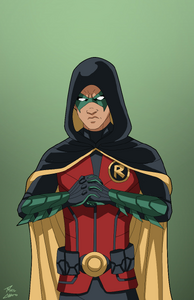 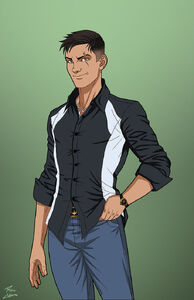 Damian Wayne (Hero)
Add a photo to this gallery 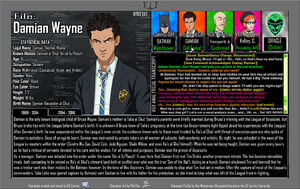 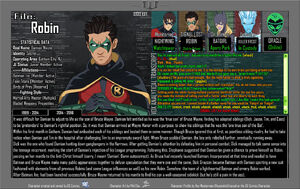 Oracle Files: Damian Wayne 2
Add a photo to this gallery 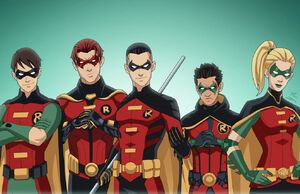 Damian and the Robins

Robin and the Bat Family

Damian and the Bat Family (Unmasked) 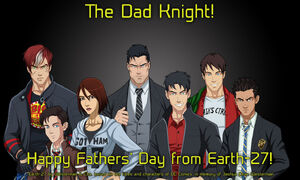 Robin (Under the Mask) 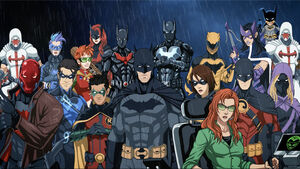 Bat Family (Extended)
Add a photo to this gallery

Retrieved from "https://earth27.fandom.com/wiki/Damian_Wayne?oldid=119702"
Community content is available under CC-BY-SA unless otherwise noted.