Connor is the child of Nyssa al Ghul and Oliver Queen, a product of their former marriage (which is still considered to be in effect, according to the League of Assassins). By birthright, Connor was a Prince of Assassins, destined to rule. When Connor was still a baby, however, he was the target of an attack from the HIVE. Fearing that the HIVE might try something like this again, Ra’s ordered his daughter Nyssa to raise and train Connor in secret. To this end, Nyssa took the alias of Sandra Hawke and relocated to South Africa, raising her child at a League safehouse. Though Connor grew up knowing of his destiny, he was not told about his father… at first. Though his mother refused to tell Connor about Oliver, there were other assassins in charge of the safety of Connor and Nyssa that liked to talk among themselves and Connor was far too good of an assassin-in-training to not eavesdrop on their conversations.

Through compiling the data over years, Connor learned that his father was not only a billionaire and superhero, but was also thought to have been the center of one of his mother’s prophetic scribbling, Connor also learned he had a half-sister and an adopted brother through this father; and though Connor had an interested in meeting his father, he kept such feelings in check as his father had betrayed not only the League itself, but also Connor’s mother.

One day, however, while his mother was away on assignment, Connor broke into his mother’s room and read from her journal. I do not know what Connor’s intentions were as even he cannot recall why he did this or what he was originally hoping to learn. What he did learn, however, was that his mother suspected Connor himself was the prophecy that Nyssa had hoped Oliver was destined to bring about. This meant that if Connor was the prophecy, he would personally bring about a new world order and be responsible for the death of millions. Unable to stomach the idea, Connor immediately fled. Knowing that his mother would turn to the occult to track him, Connor traveled to Nanda Parbat, hoping its magic would shield his location.[1]

When he arrived in Nanda Parbat, Connor was surprised to find the mystics and monks there knew who he was and had been expecting him for some time. Connor was weirded out but by then he was quite used to weird and went with it.

As time passed, Connor decided to do more than simply hide out among the residents of Nanda Parbat and chose to train his mind and soul, intently studying the methods of enlightenment available to him there. Due to the peculiar passage of time there, Connor was able to develop his spiritual awareness to a level beyond what many spiritualists in the mundane world could ever hope to achieve… but of course, time was not Connor’s only aid in achieving this.

After having spent only actual nine months in Nanda Parbat, but having experienced decades of wisdom imparted on him, Connor was able to tap into his body’s hidden reserves by way of deep meditation, and practice of mind over body discipline, unlocking the dormant powers of his genes, and pushing his body to new heights.

While doing this, Connor discovered that his body had been infused with the same chemicals of the Lazarus Pits, no doubt due to his mother’s previous ritualistic drownings and his father’s own quasi-resurrection from the Pits. By tapping into these stored Lazarus cells in his body, Connor was able to endow himself for short periods of time with superhuman stamina and resilience and also seemed able to recover from injuries quicker and even stall his aging process simply by practicing regular meditation.

Having mastered this, the mystics of Nanda Parbat told him that it was time for him to realize his fate and told him he was no longer welcome among them. Not sure where else to go, Connor decided to use his incredible abilities to help others and made his way to Star City to finally meet his father. Initially disappointed, Connor did come to see that his father was a true hero and gladly joined his band of merry archers. Connor also became a welcome addition to the Titans where he was voted class leader, much to the chagrin of his cousin Damian.[2] 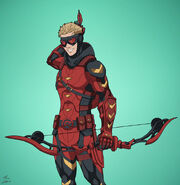 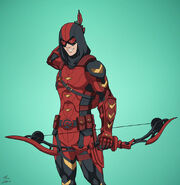