Public / No Effort to Conceal Identity

Casey began life as the comic book character known as Captain Brinke, the ten-year-old leader of the St. Michael's Children's Hospital Jamboree Fighter Squadron. The comic book didn't sell very well as it was only available in one comic book shop on one street: Danny the Street. Casey was actually created by Danny the Street when the sentient street was still quite young. Casey was meant to bring cheer to those living on Danny the Street, but lack of readers derailed those plans.

In the final arc, Casey's father had become the evil villain Torminox after contracting the Torminox virus. In order to cure Casey's father and Casey herself (who had also been infected), Casey's fictional mother launched herself toward the sun (honestly, it didn't even make sense in the context of the story). And that's where the comic ended, on a cliffhanger, with Casey's mother hurling herself toward the sun.

Except when the story next issue never came, Casey somehow found herself in the real world. She wandered out of Danny's Comics and stumbled off Danny the Street and into Coast City. Lost and confused, Casey found this world was so different from the one she came from.

There were still heroes in capes and bad guys in costumes, but technology was more advanced than the setting her stories had taken place in. That was not the only difference. When she went to the hospital seeking treatment for her Torminox infection, the doctors and nurses laughed, telling her there was no such disease.

As Casey walked from the hospital, she began to feel the infection dissipating with every second that she considered the possibility the doctors were right. A similar thing happened when she spoke with a taxi driver, trying to find her way to her home city of Dayderry and learned it didn't exist. When she went to the library and spent hours studying atlas after atlas trying to find Dayderry to no avail, Casey's fictional memories began to fade and new ones took their place.

Thinking she was now an orphan from a troubled childhood, because having a grim origin story seemed to fit this new, grim world she was in, Casey wound up in foster care for a little more than seven years.

Once out of the system, Casey put herself through night school while working as a pizza delivery girl. She learned the ins and outs of her new city and those skills later put themselves to use when she got her EMT certification and became an ambulance driver. She then settled into a mundane, though quirky, life in a two bedroom apartment with a constantly changing cycle of roommates and a cat named Lotion. Other than the cat, Casey's only friend was her partner, Sam.

Once in the early morning hours, after dropping Sam off at the end of their shift, Casey was taking her ambulance down the road for a wash. That's when she heard a strange voice coming over her ambulance's dispatch radio. She tried toggling the channels as well as turning her radio off and on, but neither worked. She cued her microphone to ask the person to identify themselves but even with her microphone's button pressed, the voice kept talking. That was weird enough to freak Casey out, but then the voice said "Look out, Casey!" and that's when Casey looked up to see a robot stumbling into the street in front of her.[1] 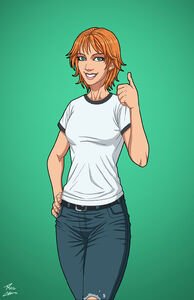 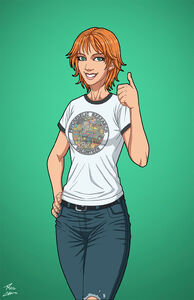 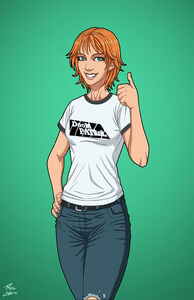 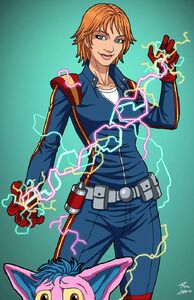 Doodle Bug and Fugg
Add a photo to this gallery 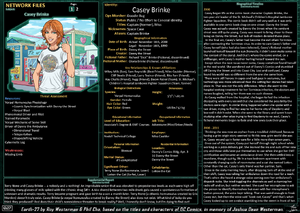 Network Files: Casey Brinke 1
Add a photo to this gallery

Retrieved from "https://earth27.fandom.com/wiki/Casey_Brinke?oldid=118999"
Community content is available under CC-BY-SA unless otherwise noted.