The Steeplechases are a family from Gotham's Park Row district with a long-standing feud with the Gold family, stemming from a century old claim that a Steeplechase killed a merchant by the name of Cyrus Gold over a business dispute, or possibly over a woman. The conflict that arose from this has been connected to at least ten murders, five arsons, four kidnapping, and over eighty cases of assault.

In spite of all this, many members of both the Steeplechase and Gold families have used their name recognition to rise to positions of power and wealth among the Gotham rich and elite. In Park Row, the local alderman has almost always been held by someone with ties to either the Steeplechase or the Gold family. Three of Gotham's past mayors have been Steeplechases and two have been Golds. Bianca's own father, Douglas Steeplechase III, was mayor in the late 1980s.

Bianca was born into power and wealth. Her father was a mayor of Gotham who made a fortune at the conclusion of his political tenure by promoting himself as a corporate closer, using his political contacts to grease the wheels and cut stifling red tape for whoever could afford his services. Bianca was raised in the hopes that she would carry on that tradition and become the new 'matriarch' of the Steeplechases.

Shortly before college, Bianca's father caught her in bed with another girl. Douglas Steeplechase did not care if his daughter was a lesbian, but he insisted that she keep her "sexual perversions" private so as not to interfere with her political prospects. Bianca's father even gave her the use of a private luxury apartment in Park Row and a secret discretionary fund to use for her romantic pursuits.

Due to the stress of juggling college, a demanding political internship, and the family drama that came with being a Steeplechase, Bianca's "love loft" became her fortress of sanity and stress-relief. Whenever she had downtime, Bianca was hitting up clubs and parties incognito. Her charismatic personality made it easy for her to leave such places with a pretty girl or two in tow. Come morning, the girls were met with a hefty sum of cash in exchange for signing an NDA.

After a Halloween party, en route to her apartment with a shy blonde, Bianca and her date became intended victims of a biker gang after an earthquake caused chaos to consume Gotham. The Laugh Pack saved the young women, mistaking them for members of their gang due to both being dressed as clowns. The two young women remained with the gang during the Cataclysm and fell in love.

Toward the end of the Cataclysm, Bianca was doused in Joker Venom. She somehow survived the ordeal and became changed, in a similar fashion to the Joker himself. Bianca became a twisted version of her past self. In her downtime, she gets personal satisfaction out of causing trouble for both the Steeplechases and Golds in equal measure. 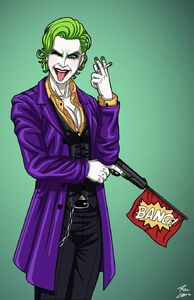 Bianca Steeplechase
Add a photo to this gallery 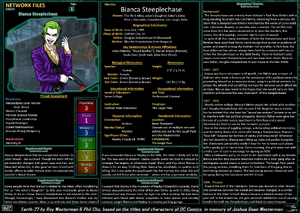 Network Files: Bianca Steeplechase
Add a photo to this gallery

Retrieved from "https://earth27.fandom.com/wiki/Bianca_Steeplechase?oldid=118976"
Community content is available under CC-BY-SA unless otherwise noted.