Barry is the only surviving child of Henry and Nora Allen. As a child in Fallville, Iowa, Barry was known for daydreaming and always having his head in the pages of a comic book or science fiction novels. Barry had one real friend: next-door neighbor Patty Spivot.

When Barry was twelve, his life turned upside when he came home from a visit to the library with Patty and found his mother murdered. Police arrested Barry's father, who professed his innocence. Unable to believe his father did this, Barry swore that he would find a way to prove his father's innocence. Barry was taken in by his aunt and uncle in Sun City. Every summer following this, Barry scrounged up enough money to buy a plane ticket to Iowa so that he could visit his father in prison and compare notes with Patty.

Barry did well in school with a renewed passion for science and problem-solving. Barry chose to attend Midwestern University in Keystone City where his favorite sci-fi writer, Jay Garrick, taught literature. It was also a short drive away from STAR Labs in Central City where Barry's other hero, Dr. Harrison Wells, was building a particle accelerator. While attending college, Barry met Iris West, a journalism student, and the two started dating.

Barry graduated and got a job with the Central City Police Department's Forensics Division. He celebrated with a flight to Iowa to visit his father and give him a lengthy plan of all the resources to seek exoneration. Barry got through the first hour of his pitch when Henry began to cry. Henry told his son to forget about him and go enjoy his own life with Iris. Barry chuckled this off and continued with his discourse. Angry, Henry smashed the phone and confessed to the murder of Nora, stunning Barry into shocked silence. Henry then ended the visit.

After this, Barry poured into his work, neglecting Iris, and his sci-fi comic book subscriptions. When Barry stumbled upon his father’s file in his lab, he fell apart. Devastated that he had spent his entire life dedicated to a lie, Barry began to tear his lab apart, getting doused in chemicals in the process.

Still enraged, Barry ran to the rooftop. He screamed at the sky or God (Barry isn't even sure of this) and as the rain hid his tears, he focused on the roof's edge and ran for it. Barry was mid-leap when a lightning bolt struck him, knocking him back onto the roof.[1]

After being struck by a lightning bolt, Barry Allen slipped into a coma for six months. When he awoke, he soon discovered that a latent metahuman gene in his body had activated, changing his body to give him enhanced reflexes, an accelerated metabolism (seriously, you would not believe how much food this guy puts away on a slow day), enhanced vision, a turbocharged brain, and of course superspeed. Being the good-hearted person that he was, Barry decided to become a crime fighter like the heroes in the comic books he always reads.

After rekindling his romance with Iris West, Barry set out to become a superhero, consulting with his old college professor (and a former comic book writer turned science fiction author), Jay Garrick, to help him on his hero’s journey. When villains started showing up in Central and Keystone City, Barry needed more than just a flashy (pun intended) costume and turned to Dr. Harrison Wells at S.T.A.R. Labs to help him further develop his powers. Over time, Wells developed a team of experts to help Barry, including mechanical engineer Francisco Ramon, bio-engineer Caitlin Snow, Snow’s fiancé and structural engineer Ronnie Raymond, and physicist Martin Stein. Together, they became the first members of the Flash & Friends.

Early on, Barry revealed his identity as The Flash to Iris when he proposed to her, to which she revealed to him that she had always known. Eventually, Iris’ nephew, Wally, learned of Barry’s secret and tried to duplicate Barry’s accident. The experiment was a partial success and Barry decided to give Wally the proper training he needed, making Wally his sidekick, Kid Flash (later “Impulse”). Team Flash would continue to grow with the inclusion of Agent Patty Spivot of the D.E.O. and Captain Darryl Frye of CCPD. Of course, The Flash was also a founding member of the Justice League (I think he’s the one who came up with the name) and has been an integral member thorough its incarnations. On a more personal note, Barry and Iris have two children: fifteen year old twins Bartholomew, Jr. (“Bart”) and Jessica ("Jessie"), both of which inherited their father’s speed and are the Teen Titans called Kid Flash and Miss Quick. 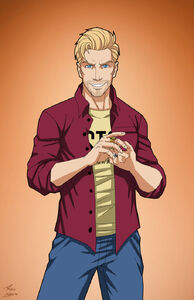 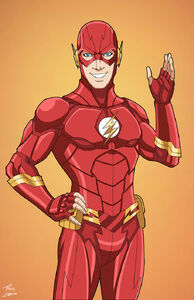 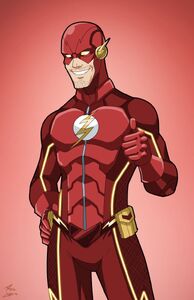 The Flash
Add a photo to this gallery 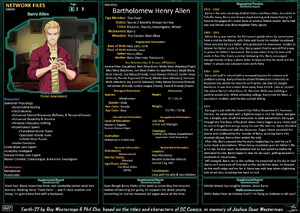 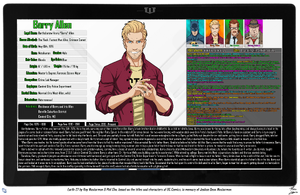 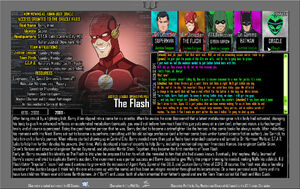 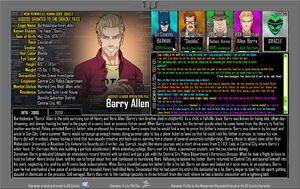 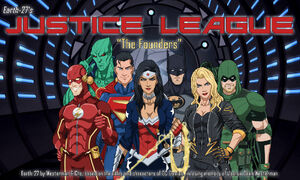 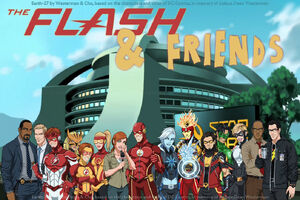 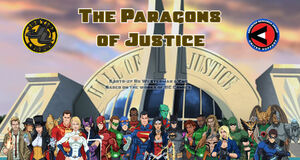 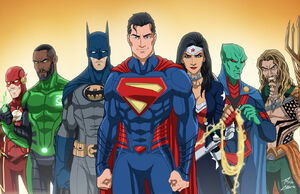 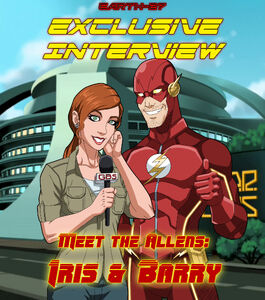 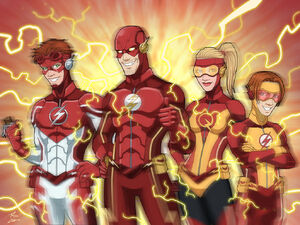 Justice League of America
Add a photo to this gallery

Retrieved from "https://earth27.fandom.com/wiki/Barry_Allen?oldid=119518"
Community content is available under CC-BY-SA unless otherwise noted.