I’m Barbara Gordon. Most people call me Babs. I’m the daughter of two awesome cops: James “Jim” Gordon and Sarah Essen-Gordon, I also have a little brother, Jimmy, which we do not need to say much about and a cousin-turned-surrogate sister, Carrie Kelley. At night, after my brother and I were sent to bed, I would postpone sleep and instead listen through the thin walls of our home as my parents talked about the horrors they had witnessed that day on the job. I feel comfortable enough to say I was equally horrified and intrigued.

At a young age, I spent a lot of my time on computers and discovered I had a knack for not just their use, but deciphering code. By the time I was ten, I made myself into a self-trained hacker and would often become involved in a variety of causes, becoming a hacktivist before the word had ever been coined. Of course, I was what we called a “White Hat,” a good guy.

As teenager, I stowed away in the backseat of dad’s squad car hoping to sneak into the GCPD mainframe and hack their database (again, I was a good guy- I had good intentions, I promise) but instead I found my dad lied to my mom. He didn’t go to the precinct that night; he didn’t even get a call to a crime scene. Nope, dad went to a secret meeting with an urban legend.

I kept quiet and the next week, Sal Maroni and Carmine Falcone were both arrested by my father on charges that actually stuck. My father was promoted from Desk Sergeant to Lieutenant of the Vigilante Task Force. Within a month, the Gotham Gazette had caught a picture of the “Bat-Man” and just like that, Gotham was as obsessed with vigilante justice as I was.

I talked my dad into letting me enroll in self-defense classes. After studying Internet videos of the Batman, I realized I’d need more than just karate lessons and a few hours at the gym and so I lied about joining a few extracurricular activities in order to enroll in three other defense courses (Aikido, Stick-Fighting, Judo) in addition to Boxing at the Wildcat Gym.

After news had broke that Batman was working with a teenage boy, I decided that it was time for a girl to show them how it’s done. So, I traded my black belt in for a utility belt…[1]

Batgirl began with a whimper, I’m sad to admit. I had the mask, the homemade costume (complete with cape and utility belt), and the attitude. But, it still took me weeks of rooftop patrols and back-alley stakeouts before I got a chance to prevent my first mugging… and I failed. I tripped on my way down a fire escape, but I didn’t give up. I did a sketch of the culprits and I made sure to commit their faces to memory. Later that month, I stopped a carjacking and recognized the tattoo on that guy’s neck. Borrowing my dad’s GCPD login credentials, I was able to gather that the tattoo belonged to the Badger Boulevard Ballers, a lower west side gang. So armed with this information and my unique brand of moxy, I paid the Ballers a visit.

I took a few lumps and maybe broke a rib or two, but I found that first victim’s wallet and returned it. It was a lot to go through for thirteen bucks and an expired gym membership card, but I was not going to let Batgirl start out as a joke. I believed in this… and it paid off. My take down with the ballers caught the attention of a certain duo who started investigating me. I am a bit ashamed to say I took them three hours to figure out who I was. They paid me a visit in the middle of my patrol the next night. I still remember the words of warning Batman gave me, “Stay out of this, Barbara,” he told me, I’m sure in an effort to scare me… but Bruce didn’t know me then as much as he thought he did.

As my wounds mended, I set my sights on a new gang in town, calling themselves the Red Hoods. While I was in the middle of my research during my lunch hour in the school library’s computer lab, a boy that didn’t go to my school slipped me a note and had me follow him to a chauffeured car in the parking lot where I met billionaire Bruce Wayne who told me that he was aware of my research and realized that I wasn’t going to quit. So he made me a deal. He’d give me a computer with unlimited access to finish my research, an armored costume, actual crimefighting training, and all I had to do was let my injuries heal completely before he would let me go out on patrol again. Longest five weeks of my life.[2]

When I recovered from my beating, Batman kept his promise and not only did he officially endorse me for patrol duty, he even gave me a Kevlar bodysuit form-fitted to my dimensions. I’m not sure I want to know how he got it fit so right in some areas… Anyway! So, while I was recovering, Bruce did let me take the Bat-Computer for a spin. He was really protective of his “baby” at first (and I don’t blame him), but after he saw that I was the better hacker (he hated to admit it, it was a bitter pill for him to swallow), Bruce let me do the work on tracking down the Red Hood Gang’s movements and we figured out they planned to make a heist at the Ace Chemicals plant. This was my first big team-up with Batman and Robin and we did kick some major teeth in! With the gang’s leader cornered, he pulled a knife on Batman and in the ensuing fight, the wannabe mastermind got knocked over a railing and into a vat of bubbly ooze. In the aftermath of the leader’s death, the Red Hood gang dissolved (much like their leaders body must have… still gross to think about), and we moved on to bigger fish.

As Batgirl, I saw a lot of action. The rise of much of our most notorious villains happened during my turn under the cowl, in what we called the “Long Halloween” (because it all started on Halloween night with Riddler and Mr. Freeze and kept going for several months like a parade of costumed freaks); I was present for Harvey Dent’s scarring and drastic shift into Two-Face; and I also got to join “the Super Friends” (what Flash called the “team” of him, Supes, Double Dubs, GA, BC, Bats, Robin, and myself when we teamed up a few times before Brainiac’s trip to National City helped make us official as “the Justice League of America”) and I helped found the Titans. So Yeah… I’m a really big deal.

Now for the twist, even though I walked on the wild side, risking life and limb every night fighting ganglords and crocodile men, it was not being Batgirl that landed me where I am now. No, I was targeted by the Joker simply for being the daughter of Jim Gordon, Gotham’s top cop. Can you say irony?[3]

Okay, yes… I am paralyzed. I live my life in a wheelchair now, all because a madman shot me in a bad to drive my father insane. It nearly worked, to tell you the truth. Hell, it nearly drove ME insane, too. But after I was done feeling sorry for myself, I realized I had a lot of work to do. First thing to do was take care of myself. I needed help and admitting that was difficult. So, I got myself into some physical, occupational, and psychological therapy. With that underway, I started to work on getting the Dynamic Duo back together, Bruce and Dick had a falling out and since I was in a coma, I was unable to talk some sense into them before they reached their breaking point. By the time I woke up, Dick was struggling with finding a new purpose in his life and Bruce was in a dark place. So first course of business, I helped get Dick set up as Nightwing in Blüdhaven, giving him a chance to carve his own path and step out of the shadow of the Bat, hoping that in so doing he would begin to see all that Bruce had offered him that he had been overlooking due to his rage.

With Dick taken care of, I then talked to Bruce, opening him up to the prospect of taking on a new Robin. I could not have predicted that he would choose a street-kid like Jason Todd to fill that void in his life, but to Batman’s credit, he saw what others never had seen in Jason before and was beginning to coax it out of the kid… and then the Joker broadcast his online torture and murder of Jason Todd and that’s when something happened that I could have never predicted… we were powerless to stop it. The Joker had devised a cyber-plot we were unprepared to handle, technologically and emotionally.

I know the very moment I became Oracle, it was the moment I saw Jason’s blood dripping from the Bat-Signal after my father allowed Batman to carry the body away. Now, just Batman has his Gotham, I have the World-Wide-Web. Now, I am not just Bat-Girl in a wheelchair, I am a critical part of the entire “capes and tights” franchise as an integral part of the operations of not just Batman’s crusade, but also those of the Justice League, the Titans, and the Outsiders… but I also the leader of my own team: the Birds of Prey! Yeah, I’m a big deal. ;)[4]

Barbara and the Birds of Prey 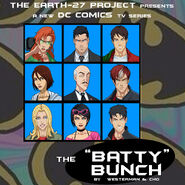 Batgirl (Under the Mask)